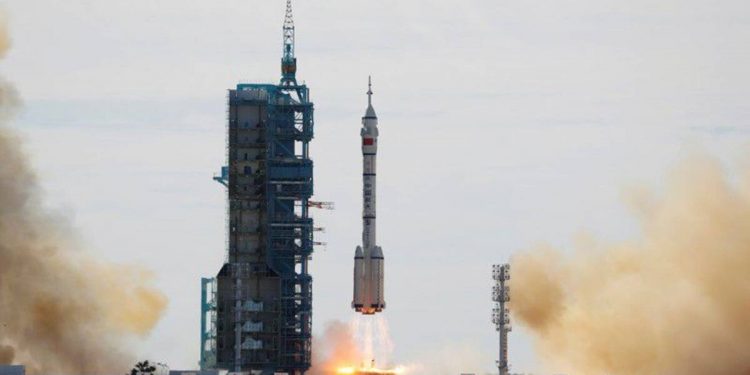 The spacecraft is expected to send three astronauts to its space station core module Tianhe for a three-month mission.

It is the seventh crewed mission to space and the first during the construction of China’s space station, Xinhua news agency reported.

It is also the first in nearly five years after the country’s last manned mission.

The spacecraft, atop a Long March-2F carrier rocket, was launched from the Jiuquan Satellite Launch Centre in the Gobi Desert at 9.22 a.m. (Beijing Time), China Manned Space Agency (CMSA) said.

While Haisheng is a 56-year-old veteran who participated in the Shenzhou-6, 54-year-old Boming was a part of Shenzhou-10 missions. Hongbo, 45, is on his first space mission.

The three astronauts are expected to set a new record for China’s manned space mission duration, exceeding the 33 days kept by the Shenzhou-11 crew in 2016.

The Shenzhou-12 spaceship will conduct a fast autonomous rendezvous and docking with the in-orbit space station core module Tianhe, forming a complex with Tianhe and the cargo craft Tianzhou-2.

The astronauts will be stationed in the core module.

China launched its space station core module Tianhe on April 29 and cargo craft Tianzhou-2 on May 29.

The two completed a computer-orchestrated rendezvous and docking on May 30, waiting for the first crewed mission to unpack the cargo.