Kolkata-based intellectual Garg Chatterjee has hurt the sentiments of the Assamese people by terming Chaolung Sukaphaa as a Chinese invader.

Chaolung Sukaphaa was the first Ahom king and founder of the Ahom kingdom, and the Assamese community.

Chatterjee, who claims himself as a Bengali nationalist and federalist, in a tweet at 9:14 pm on Wednesday not only termed Sukaphaa as a Chinese invader but also made derogatory remarks on the great leader.

“There is a State in India where the “State Day” is celebrated to commemorate a Chinese invader who brutally attacked India with Chinese troops,” Chatterjee, who has no knowledge about Assam, said in his tweet.

“This invader is considered a Hero by #China-funded anti-Indian separatist group ULFA (United Liberation Front of Assam),” he added in the tweet.

“Why does @sarbanandsonwal regularly celebrate a Chinese invader and his invading army?” Chatterjee questioned in his tweet.

“Why does banned separatist group ULFA also celebrate the Chinese invader?” he asked.

Chatterjee also questioned: “Do real Indians know that Indian tax money is being used by BJP in Assam to put up statues of a Chinese invader?”

Every year, the Assam government celebrates Asom Divas in the memory of Chaolung Sukapha.

However, neither Assam BJP nor chief minister Sarbananda Sonowal is yet to react regarding the derogatory remarks made by the intellectual from West Bengal during the ongoing India-China face-off in Ladakh.

Meanwhile, Bhaskarjyoti Gogoi, a youth from Dibrugarh, has filed an FIR in Dibrugarh Sadar police station against Chatterjee. 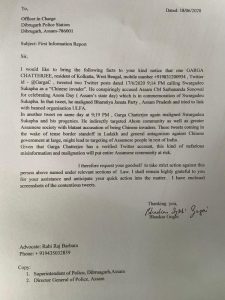 Gogoi has demanded strict action against Chatterjee for calling Swargadeo Sukapha as a “Chinese invader” and for hitting out at Assam CM Sonowal for celebrating Axom Day in commemoration of Sukapha.

“He conspiringly accused Assam CM Sarbananda Sonowal for celebrating Axom Day (Assam’s state day) which is in commemoration of Swargadeu Sukapha,” Gogoi mentioned in the FIR.

In May 2019, Chatterjee making the slogan “Chalo Paltai-2021” public on social media urged the Bengali people of Assam to get ready for a fight, and along with two other intellectuals, he was allegedly involved in a conspiracy to divide the people of Assam.