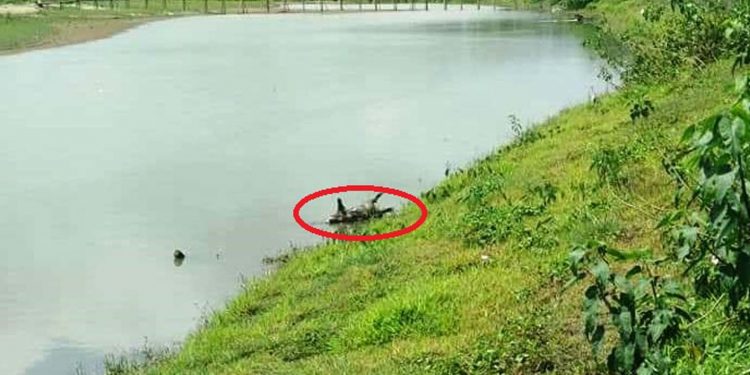 Carcasses of pigs floating on the Ranganadi river and sticking on its shallow banks have left many villages under panic and discomfort in Lakhimpur district.

The incident has been reported from the downstream areas of the river since April 24 where dead animals on the river are not only filling the air with the stinky smell but also alarmed the entire population of this riverine area of a possible outbreak of another epidemic amidst the coronavirus lockdown.

The presence of pig carcasses in Ranganadi is affecting the lives of hundreds of villagers of the downstream areas who drink water from the same river and use it for washing and bathing.

“We fetch water from the river for drinking and bathing and wash clothes there, but now it has become impossible to do the same,” said a villager.

Their cattle also have stopped drinking water from the river for this contamination.

The villagers are also concerned by the nocturnal menace of dogs that scramble to feed on the dead pigs in that area.

The outbreak of swine fever in Lakhimpur district and the throwing of the carcasses of the pigs into the river in the upstream areas of the Ranganadi may be the reason for trouble in the downstream areas.

Thousands of pigs have died across Lakhimpur districts of possible classical swine fever at a time when piggeries have been hit by the COVID-19 lockdown in the state.

In Tamera-Mising village under Narayanpur Revenue Circle of Lakhimpur district, hundreds of pigs have died in the last three days.

Each of the villagers, who keep pigs are losing two-three of them daily on average these days.

“The animals first have rheum discharges on eyes followed by fever and loss of appetite before succumbing to their ailments”, said a villager who has lost five pigs in a day in that riverine village.

More than two thousand pigs have died so far in Gogamukh on Lakhimpur-Dhemaji district boundary since last week.

Symptoms include high fever, unconsciousness, the problem in breathing, vomiting, dysentery, loss of appetite, forming of reddish warts near ear, mouth, legs and groins are reported in the affected animals from Gogamukh.

“The pigs die in two to seven days of showing these symptoms”, a piggery owner said.

In Dhakuwakhona sub-division of the district, most of the cases of swine fever cases are reported from the riverine areas.

The epidemic was widespread in villages like Ezarguri, Bogoriguri and neighbouring areas under Kherkota Gaon Panchayat.

A pig farmer says that the mortality rate of animals kept in captivity is relatively low than those who roam freely outside the households and visit the paddy fields.

It may be recalled that cases of pigs dying in large numbers in unknown diseases have been reported since mid-February this year in Silapathar-Chimen Chapori areas of Dhemaji and in riverine areas of Gohpur in Biswanath districts—both neighbouring Lakhimpur.

On March 2 there were reports of many carcasses of pigs were seen floating on the Sisi-Tongani river of Dhemaji district which joins Lai-Pulia river in Lakhimpur district.

The Lai-Pulia river becomes Chari-Kodiya in Dhakuwakhona before meeting the Subansiri in its downstream. A major portion of fishes supplied in Lakhimpur district come from these rivers.

On March 21 there was a report from the riverine areas of Gohpur in neighbouring Biswanath district in which hundreds of dead pigs were found floating on the Kharoi river.

Veterinary experts in the state have so far ruled out the outbreak of swine flu or H1N1 and attributed the present epidemic as classical swine fever.

Classical swine fever is a viral disease that affects pigs only and requires vaccination in time.

The Lakhimpur district administration has not made any statement over the swine fever epidemic in the district so far.

Burning or burying the carcasses in 3 to 4 feet deep pits is the advisable way to stop the spread of the epidemic.

Lakhimpur district contributes a major portion of pig production in Assam which has the most farmed pigs in the country according to the 20th livestock census from 2012-2019.

Along with Assam at the centre, the northeastern states consume 65 per cent of the 4.26 lakh metric tonnes of pork produced in the country.