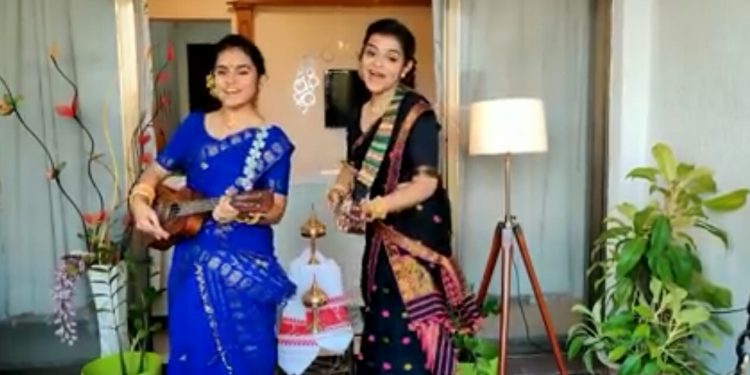 Amid the second phase of nation-wide lockdown people are glued to the screens of their digital gizmos to beat the boredom.

Social media is abuzz with photos and videos of people confining themselves in their residences.

But a heart warming  video of two children from Nalbari district of lower Assam performing on a popular Assamese love song ‘Ei Hahi Bhaal Laage‘ is being widely shared on social media and is winning hearts.

But the wow-factor in it is the fact that the duo performed the song using a makeshift drum kit.

While the girl sings the song, the boy performs on a makeshift drum kit made up of cardboard boxes, packaging material, banana tree trunks, bamboo and a metal tray.

The broadcast starts with the girl saying, “Namaskar, we are going to do ‘timepass’ by singing”.

She then begins to sing the popular song by singer and former All India Radio artiste Nasreen Halim from Dibrugarh whose lyrics were written by Hemanta Dutta.

The performance by the children broadcast from a Facebook account Rupali Pranamita have  received a positive response of netizens and has been shared by 13,000 plus users and liked by 14,000 users in Facebook  and a lot of people praised them for their creativity and inquisitive mindset.

Another  performance on immortal Assamese numbers ‘Phul Phulise Boxontat‘ and ‘Moina Kun Bidhataai Hajile‘  that has been doing rounds in the social media are by Nandy sisters – Antara and Akita Nandy performing on the occasion of Rongali Bihu in Youtube which has crossed 34,000 views in three days.

Playing Ukuleles and drapped in blue and black coloured traditional mekhala-chadors, Antara and Akita Nandy performed on the balcony of a home.

Antara Nandy in her twitter handle @AntaraNandy tweeted, “Bihu is a spirit – We can stay home and yet enjoy Bihu by spreading positivity in our own way – here’s ours! Sending loads of love from Pune to all our Assamese Listeners!”

“After a hectic day, it is refreshing to hear this Soulful Bihu from Antara and Ankita Nandi -Phul Phulise Boxontot | Moina Kun Bidhataai | Nandy Sisters | Bihu Balco…” (sic) while sharing the link of their performance in YouTube.