Gaurav Borthakur’s Cinnamara Chronicles uploaded with regularity on his Facebook page bring to the fore a microcosm of tea history lost in the annals of time,

His latest chronicle on Bungalow number 2, is the sixth in the series of bungalows of the historic Cinnamara tea estate of Jorhat.

While his narratives bring alive the stately bungalows, the manicured lawns, the rockery, lily dotted ponds, horses haltered in the stables, there is more to it than just description of the architectural splendours and landscapes.

The chronicles are replete with anecdotes, spooky tales of ghosts, snippets of information, all of which bring to life the lives and times of people who laid the foundation of Assam’s booming economy based on tea.

His chronicles have attracted national and international attention, with people whose parents worked there or in the neighbouring gardens contacting him.

“Stephen Brown sent me a message from London, said that he had lived in one of these bungalows when his father worked there as a manager,” Borthakur said.

“He has fond recollections of visiting tea magnate Hemendra Prasad Barooah and his family at their Club Road residence with his parents,” he added.

“He evinced interest in returning once more to relive those good old days, ” Borthakur added.

His father Gusl Brown had later become the Superintendent of The Jorehaut Tea Limited.

From USA Rick Lahkar, whose father worked as a manager at Cinnamara, during the early 1980s had called in the dead of night to reminisce on those happy times at Cinnamara.

Pradhuman Singh Bhati, who was the General Manager of  Corporate Affairs at Reliance Industries Ltd two years ago, had contacted him.

His father Guman Singh was the manager of several gardens under The Jorehaut Tea Limited when it was owned by the British.

Cinnamara tea estate is itself steeped in history.

The garden was established by Maniram Dewan, considered to be Assam’s first indigenous tea planter.

He was later hanged by the British for treachery in 1858. It was acquired by the second oldest tea company in Assam, the British owned Jorehaut Tea Company before being acquired by the government of Assam in 1970 the owned  Assam Tea Corporation Limited in  1972

While Borthakur’s work as district NRC officer in charge takes him to different places his first passion is tea and thus the tea bungalows loomed large in his horizon.

He said that he had chronicled nine bungalows of Cinnamara tea estate which has a total of 19 including those in the out divisions and adjoining Tocklai tea estate, which was once part of the Cinnamara Tea Estate.

Borthakur revealed a long list of his sources from whom he had collected the information from some people like Shitangshu Hazarika, Manager of Naginijan TE, Bipul Potongiya, Manager of Missamora TE, Swapan Deka, Manager of Cinnamara TE, Diganta Baruah from Delhi who was at Cinnamara TE during his childhood. 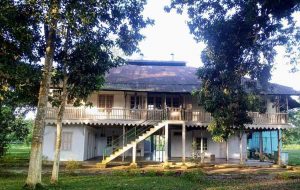 And also from Lakshmi  Nayak, Meena Tasha and Anganwadi workers at Cinnamara.

“I also drew a few interesting facts from some memoirs by various writers, some from books like ‘All about tea, a history of Jorehaut tea company, articles from some journals, etc,” he said.

” It was (late) Puran Mirdha, an old tea worker I met several years ago who threw an interesting light on British managers under whom he had served, ” Borthakur said.

Narrating about the welfare activities initiated by the British towards the labourers during ’50s and ’60s as told by Mirdha, Borthakur said that the Cinnamara tea estate hospital was one of the best in those times.

The Managers had cared for us, our health and families, our houses were painted annually, the lines kept clean and we had running water in our taps, something not made available now, ” Mirdha had told Borthakur.