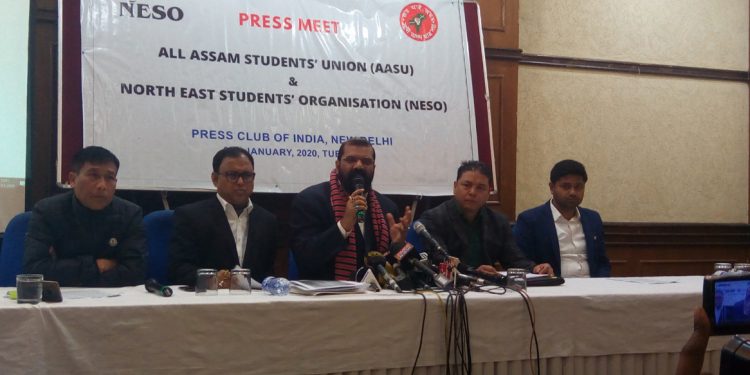 All Assam Students’ Union (AASU) chief advisor Samujjal Bhattacharya on Tuesday demanded that entire Northeast India be brought under the Inner Line Permit (ILP) system to exempt the region from the purview of the CAA.

There is a provision in the Citizenship Amendment Act (CAA), 2019 that the states with Inner Line Permit (ILP) and 6th Schedule areas are exempted from the implementation of the Act.

“It is understood that CAA is bad and will have a negative impact on the demography of these areas. If CAA is bad for the exempted areas, then how can it be good for the other areas of Assam,” said Bhattacharya while addressing the media in Delhi.

The AASU leader said that CAA has violated the human rights of the indigenous people of Assam by threatening their political rights, culture and overall social identity.

“The Bengal Eastern Frontier Regulation 1873 placed practically the entire state of Assam under ILP system before it was recently withdrawn on December 11 (2019) which is again an act of political injustice,” he added.

“We demand that Assam and whole of northeast should be placed under the Regulation to ensure that the illegal immigrants once detected in Assam as per the provision of the Assam Accord do not re-enter the region in future illegally,” said Bhattacharya.

Accusing Assam chief minister Sarbananda Sonowal as a ‘betrayer’, Bhattacharya on Tuesday said from being a jatir nayak (people’s hero), he (Sonowal) has become a ‘protector of illegal infiltrators’.

Bhattacharya was talking to the reporters in New Delhi on the Citizenship Amendment Act (CAA).

“We are addressing the press conference in the national capital today just to show the government that Assam and Northeast are in India and Centre can’t adopt step-motherly attitude with us,” he said.

Bhattacharya said neither Assam nor Northeast will accept the CAA in any form. He further accused the BJP government at the Centre of playing ‘divide and rule’ policy.

“We oppose violence on students in any form. The central government is responsible for the entire incident as the law and order in Delhi comes under the Home Ministry,” said Bhattacharya.