Bodo Accord: Sonowal takes stock of preparation ahead of Modi’s Kokrajhar visit

Function to be organized at Kokrajhar for expressing gratitude to PM: Sonowal 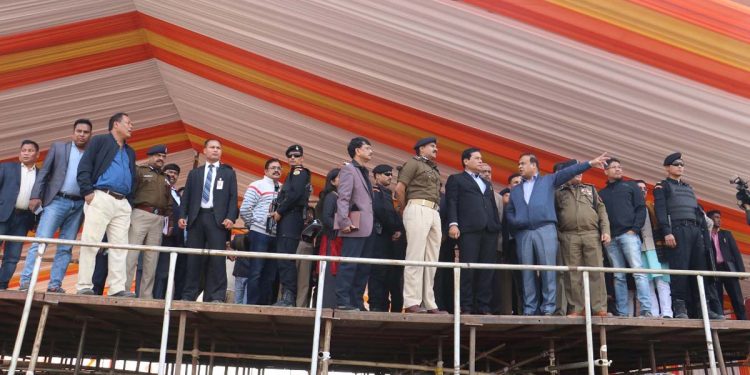 Assam chief minister Sarbananda Sonowal on Wednesday took stock of the preparations for the function to be held in Kokrajhar to celebrate the signing of the third Bodo Accord.

The function, to be held on Thursday, will be attended by Prime Minister Narendra Modi.

Visiting the meeting venue, Sonowal took stock of the construction of the main podium of the function.

He also took stock of the preparations being put in for greeting the dignitaries along with other arrangements of the function.

To ensure participation of the people of BTAD in the Bodo Accord celebration programme at Kokrajhar, the Assam government has declared February 7 as a public holiday.

As per the order, issued by the Assam government on Tuesday, all the state government offices within the jurisdiction of the Kokrajhar, Chirang, Baksa, and Udalguri districts will remain closed on Friday.

During his visit to the venue, chief minister Sonowal said the Bodo Accord signed under the leadership of the Prime Minister in New Delhi on January 27 ushered in a new lease of hope and enthusiasm among the people.

He also said the function will be organised to convey the gratitude of the people to the Prime Minister.

Sonowal also maintained that the PM, who has always given top priority to the development of Northeast, took this special step to usher in peace and development in the region.

The Assam CM also said the people of Assam are grateful to the PM and everybody belonging to all caste, community, and ethnicity would participate in the function to express their gratitude to the PM.

Chief minister Sonowal also reiterated that the people going to participate in the function should not face any encumbrances as he asked the organisers to take special steps towards this end.