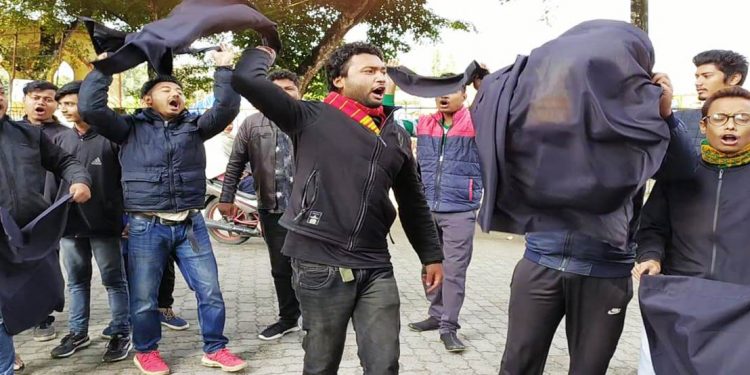 AASU and AJYCP activists on Monday waved black flags at Assam minister Naba Doley and Lakhimpur MP Pradan Baruah during their visit to the Lakhimpur district.

The black flags were shown by members of the North Lakhimpur and Dhakuwakhana units of All Assam Students Union (AASU) and Asom Jatiyatabadi Yuba Chatra Parishad (AJYCP).

AASU and AJYCP members waved black flags at the minister and the BJP MP in protest against the Citizenship Amendment Act (CAA), 2019 at Dhakuakhana.

The protesting student activists shouted anti-CAA slogans and denounced the minister and the MP as their motorcade passed through Dhakuakhana on Monday.

However, police detained four protestors who waved flags at Dhakuakhana following the incident.

They were greeted by hundreds of AASU and AJYCP members shouting anti-CAA slogans and waving black flags as their motorcade entered the Circuit House complex in North Lakhimpur town.

The agitating crowd continued demonstrating in front of the Circuit House till the minister and the MP came out with their motorcade.

The protestors also tried to block their way by waving black flags.

However, the police and the security personnel managed to make way for the convoys of the minister and the MP by pushing the protesters.