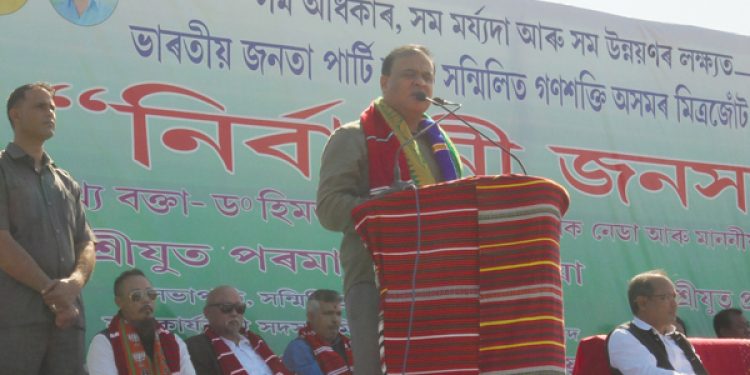 Assam Minister for Finance and PWD, Dr Himanta Biswa Sarma said his government has undertaken schemes for welfare of the poor and economic empowerment of the women, while it has accelerated the rural development processes in the state.

Taking a pot shot at the opposition Congress, Sarma alleged that Congress ruined the panchaytiraj during its 15-year rule in Assam, but BJP government had rejuvenated it.

According to Sarma, Congress and AIUDF parties are enemies of Assamese community that they are contemplating foreign nationals to be settled in Assam. He appealed the people to vote out the parties from power and support BJP and its allies Sanmilito Gana Sakti (SGS) and Bodoland People’s Front (BPF) to continue the trend of panchayat and rural development.

Speaking about the role of Asom Gana Parishad (AGP), a coalition partner of the ruling party in Dispur, the minister said the regional party has refused to go on election with the ruling party, which he termed very ‘unfortunate’. He has ruled out any hindrance for the saffron brigade caused by AGP.

The minister also requested to deprived BJP workers of Dhemaji district to give up their dissident activities for the sake of development. The veteran BJP leader has appealed the voters to give their mandate towards BJP and its allies- SGS and BPF in the ensuing election.

The minister along with the MP Baruah and other leaders later addressed another election rally at Muchkhowa under the district. The team later left Dhemaji in the afternoon and for Lakhimpur to attend election campaign.