In the vast canvas of Assam’s diversity, connoisseurs of song and music can look forward this Bohag Bihu to not only a slew of Bihu songs but such gems as a Sanskrit song sung in a Bihu tune, to a new album of Parvati Prasad Baruah’s songs and also a devotional album in the classical language.

Ranjan Bezbaruah, whose rendition of Saare jahan se accha Hindustan hamara and Mohammed Rafi’s patriotic song Jahan daal daal par sone ke chidiya in Sanskrit was aired by DD News in the past two years on Republic Day, tomorrow in DD`s Vartavalli programme at 7am, Madhuram Madhuram, a Sanskrit song he has composed and sung in a Bihu tune along with Krishna Bora will be telecasted.

“In keeping with the Bihu festivities, the song too sings of spring and awakening of new life of the trees,  flowers and the joie de vivre which the Assamese new year ushers in, ” Bezbaruah,  a Sanskrit scholar and teacher said.

He further said that it was his avowed aim to take the hits of Bhupen Hazarika and other greats like Jyoti Prasad Agarwala and Bishnu Rabha to the rest of the country by translating and singing them in Sanskrit without deviating from tune and the cadence.

Bezbaruah said that Doordarshan has not only given him a slot in Vartavalli but now he can promote the essence of the Bihu songs and spirit through Madhuram Madhuram and take this to a wider audience.

On the other hand, Pronoti Baruah, a singer par excellence of Assamese songs of different genre, who hails from Sivasagar is also set to release her new Sanskrit numbers during this Bihu. 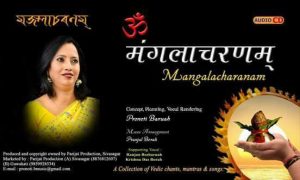 An All India Radio approved artist in modern songs since 2003, Baruah has over the years paid tribute to Parbati Prasad Baruah, Jyoti Prasad Agarwala, Bishnu Rabha and Nirmala Prabha Bordoloi by singing their songs, holding workshops and through lectures and articles in various fora.

In keeping with her passion for singing Pronoti  has sung eight of Parbati Prasad Baruah’s songs, the CD will be launched soon and is in the making of the second edition of Mangalacharanam, a collection of ancient Vedic chants, mantras and shlokas.

“I have never learnt Sanskrit but devotional hymns and chants have always appealed to me.  My first venture in this was Vandana, a recording of the Sanskrit prayers of Shankar Dev Shishu Shiksha Niketan, a component of Shishu Shiksha Samiti which is associated with Vidya Bharati,”she said.
Listening to the flawless Sanskrit diction in the first edition of Mangalacharanam, it is difficult to believe that Baruah was not well versed in the language.

In appreciation of her work Pt. Bidyut Mishra has said, Pronoti bears in heart the very essence of Sanskrit culture and has been practicing it formally in the classical tradition.”
“Many singers of repute in Mumbai and other states like Lata Mangeshkar and Anuradha Paudwal have sung devotional songs in Sanskrit but this is probably the first attempt from an Assamese.  I hope my second audio is as well received as the first,” she said.

Pronoti, who runs the Paribas Music School in Sivasagar has carved a niche in Parbati Sangeet  having learnt to sing these immortal numbers under the guidance of Late Pranabiram Baruah and had  accompanied him in various music workshops and performances all over Assam.

“This is an attempt to preserve and record some of Parboti Prasad’s rare melodies for posterity,” she said.