Babulal is not ‘captive born’ elephant, and was caught from jungle.

No record of Rupsing, Babulal and Rani as “captive” elephants as per Assam Forest Department records

Official records of the Assam Forest Department proves that 3 of the 4 elephants which were to be transported to the Jagannath Temple in Ahmedabad, are not ‘captive born’ and were caught from the wild.

It is shocking that three elephants — Rupsing, Babulal and Rani had no official records of being “captive born” till December 30, 2018.

The Assam Forest Department on December 30, 2018, through a letter (WL/FG.7/16/TP/Domestic Elephant/2018-2019) informed the Project Elephant Division of the Ministry of Environment and Forest there are 905 captive elephants in the state.

Surprisingly, names of Rupsing, Babulal and Rani did not feature of 905 captive elephants in Assam. The list was submitted by the then Chief Wildlife Warden, D.P. Bangkhwal.

Even if the three juvenile elephants were without microchip and without ownership certificates, their names should have been in the list of 905 elephants of Assam as on December 30, 2018. 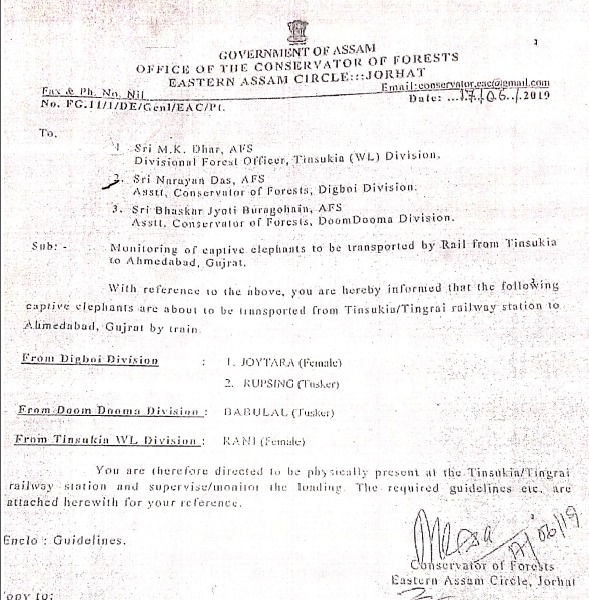 Earlier, it was reported that two elephants — Rupsingh and Rani were micro-chipped on June 15 under the supervision of Assam Forest Department officials. Ownership certificates were also issued to the two elephants as ‘captive’ born.

Both Rupsingh and Rani are about six to seven years old, and were caught from the wild in January 2018.

The micro-chip number of Rupsingh, a male sub-adult, is 000770A96E, and the name of the elephant’s owner is Piyal Moran of Lakhipathar in Upper Assam’s Tinsukia district.

The micro-chip number of Rani, a sub-adult female, is 000770AB16, and is owned by Joginath Pegu of Laika village in Tinsukia district.

The Wildlife (Protection) Act, 1972 has very strict rules when it comes to capturing of wild animals, which it defines as hunting under Section 2(16) of the act. As a Schedule I animal, Section 9 of the act prohibits the capture of elephants from the wild.

Also Read – Why is Gujarat so fascinated with Assam elephants?

As per the Wildlife (Protection) Act, 1972, capture of wild elephant is grossly illegal. It is a non-compoundable offence, punishable with 3 to 7 years imprisonment, and a fine of not less than Rs 10,000.

Now, it has come to light that it addition to Rupsing and Rani, even Babulal was not captive born, and was caught from the wild.

Ownership certificate was issued to Moneswar Moran of Raidang village in Tinsukia district for Babulal on August 11, 2015, and showed that the elephant was micro-chipped by Dr. Anup Kumar Deka, a veterinarian from Doomdooma. 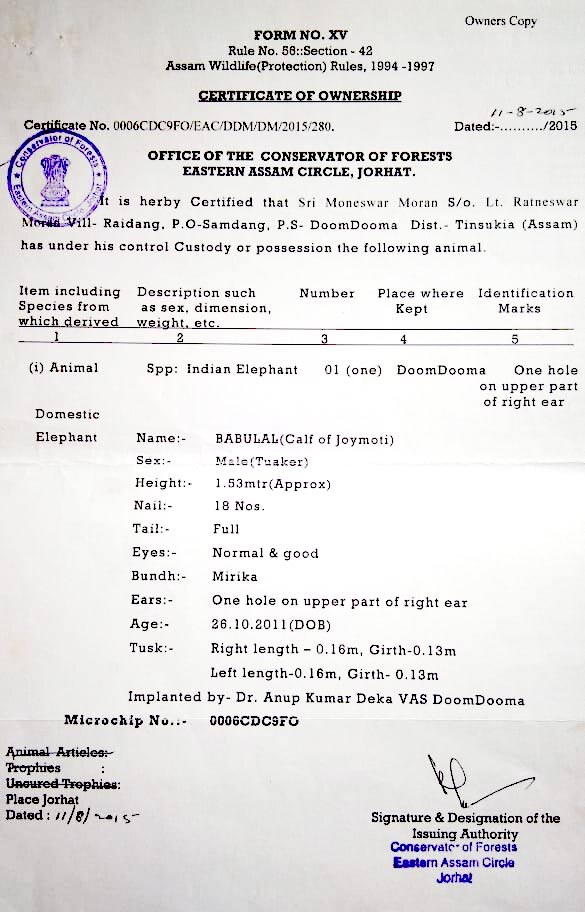 Surprisingly, Babulal’s name was not included in the list of 905 captive elephants, which was sent by the Assam Forest Department on December 30, 2018 to the Ministry of Environment and Forest.