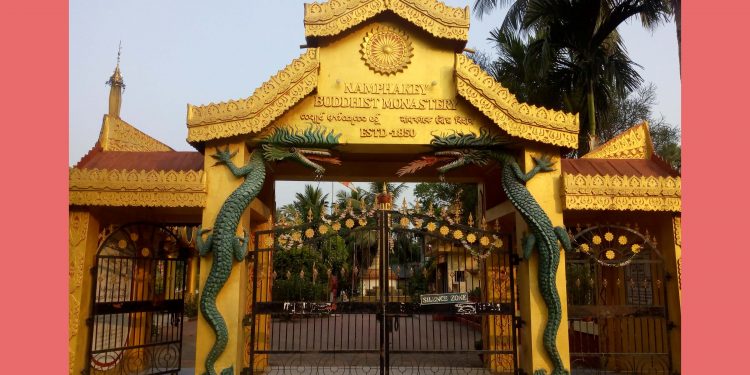 The Taiphake people of Namphake village in Dibrugarh have preserved their ancient scripts for the future generations to know about the language.

Taiphake is a very small community residing in Assam with a population of 1775.

They migrated to Assam during Ahom rule in 1770.

The people of Namphake village now have urged the state government to preserve the 200-year-old Taiphake scripts.

The people of the village are much concerned about their culture and tradition.

They have been doing everything possible to preserve their culture and tradition for the generations to come.

The youths of the village who have taken the matter seriously take classes on Taiphake at the premises of Namphake Buddhist monastery.

“We are losing our own identity because of the strong influence of others’ cultures. The influence of Hindi and English has strongly influenced our dialect because sometimes our people use some Hindi words along with our dialect,” said Ngidethon Gohain, a retired professor of the Centre for Studies in Linguistics at Dibrugarh University.

“Our language has been facing extinction threat but still we are doing as much as possible to preserve it,” added Gohain.

He said to preserve the language and culture of Taiphake, they had started classes on Taiphake.

However, the elder members of the village are offering classes on Tai-phake at the Namphake Buddhist Monastery

Paimthee Gohain, a resident of Namphake said, “Our elders have preserved our ancient Taiphake scripts but the scripts should be preserved in a scientific manner. We urge the government to preserve our ancient scripts.”

He said they have built a library for preserving the scripts.

Gohain said, “In our Buddhist monastery, we have treasures… some of the ancient manuscripts and books which narrate the story of our journey , struggle and settlement. The manuscripts were written in Taiphake and Pali language. We have preserved our rich tradition, culture, beliefs, material culture, practices, customs and language in the village. Due to our cultural significance the village is attracted scholars from outside.”

“The village has become a cultural hub which provides wide scope for research in different areas of their living condition and lifestyle. We follow Buddhist religion and our tradition is unique compare to others,” said a village elder.

For first time an eleven-member delegation from Namphake village under Ai-cheng Gohain village head went to Myanmar for a international seminar ‘On Culture richness of Tai-phake’.

“Last year, we started classes on Thaiphake in our village and many young boys and girls of the village are showing interest in learning the language. Our culture and tradition are quite different from others. So we want to preserve it for future generations,” Gohain said.