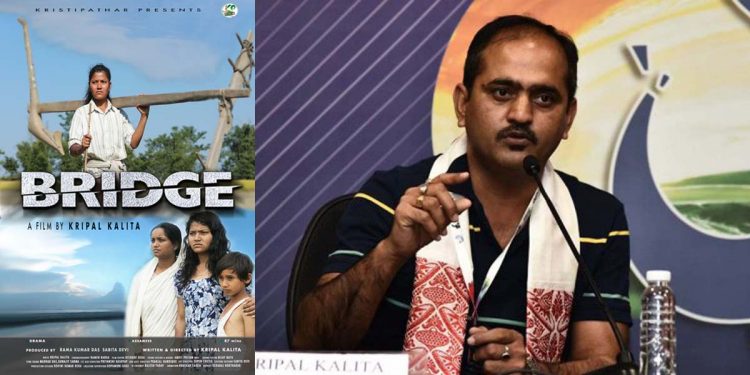 Indian film director Kripal Kalita from Assam has brought laurels to the country and the state after winning the IFFI 51 Special Mention Award for his Assamese film ‘Bridge’.

Kalita received the award in the just-concluded 51st edition of the International Film Festival of India (IFFI) held at Panaji in Goa.

‘Bridge’ reflects the life amidst hardships caused by annual floods in rural Assam.

The film tells the story of the annual phenomenon in the state, wherein the mighty Brahmaputra and its tributaries flood many villages and ruin cultivation.

Kalita receives a certificate for the Award.

The epic World War II film ‘Into the Darkness’ (De forbandede år,) which portrays the story of a Danish electronics factory owner, who is forced to produce for the occupying Nazi forces, has won the coveted Golden Peacock Award at the international film festival.

Directed by Anders Refn, the 152-minute Danish film gives a gripping dive into the complex emotional turmoil which the people of Denmark had to undergo, during the Nazi occupation of the country.

The Golden Peacock Award consists of a cash prize of Rs. 40 lakh (Rs. 4 million) to be shared equally between director Anders Refn and producer Lene Børglum, both of whom have also been presented with a certificate each as well.

The Silver Peacock for the Best Director goes to Taiwanese director, writer and producer Chen-Nien Ko, for her 2020 Mandarin drama film ‘The Silent Forest’, a candid and heart-wrenching exposition of the systemic sexual abuse that happens in a school for children with special needs.

Notably, the Silver Peacock for Best Actor – Male too has been awarded to 17-year-old Tzu-Chuan Liu, who through his role as the protagonist Chang Cheng in The Silent Forest, has been able to beautifully and powerfully bring out the world of the differently-abled boy, the I&B minister said in a statement.

The award carries a certificate and cash award of 10 lakh rupees (Rs. 1 million).

The Silver Peacock for Best Actor – Female has been awarded to Polish actor Zofia Stafiej, for her role in Piotr Domalewski’s I Never Cry / Jak najdalej stad.

Stafiej receives a certificate and cash award of Rs 10 lakh for the award.

The IFFI 51 Special Jury Award for a film goes to Bulgarian director Kamin Kalev for his 2020 film February, which tells the life story of a man at three different ages of eight, eighteen and eighty-two.

The award for Best Debut Director has been presented to Brazilian director Cássio Pereira dos Santos, for his 2020 Portugese film Valentina, an eponymous film which tells the story of a 17-year-old transgender Brazilian girl, whose sole aim is to lead a normal life with her mother.

The prestigious ICFT UNESCO Gandhi Award, given to a film that best reflects Mahatma Gandhi’s ideals of peace, tolerance and non-violence, has been awarded to Ameen Nayfeh’s 2020 Arabic film 200 Meters.

The Award consists of a certificate and a medal and is given as part of IFFI’s collaboration with the International Council for Film, Television and Audiovisual Communication (ICFT) Paris.

The awards have been decided by the IFFI 51 International Jury comprising eminent filmmakers from across the world, with Argentine director Pablo Cesar as chairman.