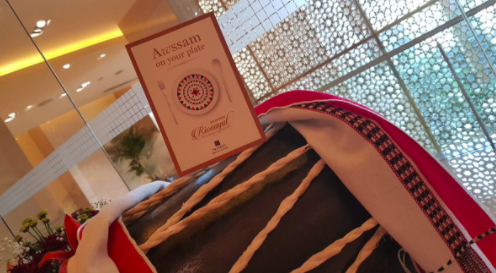 Here is some great news from Trident BKC Hotel for Assamese people residing in Mumbai and craving ethnic food.

Chef Kashmiri Barkakati Nath from Guwahati is collaborating with the hotel and has curated, prepared the menu which will be served during the festival.

Be it the flavour some Badami Aloo Bhaji or the refreshing Komolar Paiyokh, at Assamese Rivaayat, guests are in for an incredible feast. Get set to discover some of Assam cuisine’s best-kept secrets. 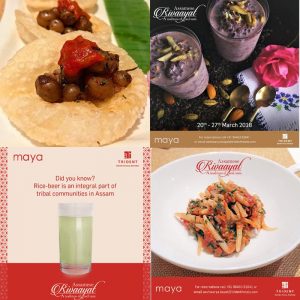 Kola Borasawalor Paiyokh for Rs 650 is a traditional Assamese delicacy, which will be served for the guests. Originally from China, it found its way to the Northeast. It was believed that if consumed, would ensure good health and longevity and hence was reserved only for the Chinese Emperor.

Guests can taste rice-beer, a popular beverage among the Assamese. Most households brew it themselves.

Anguli Pitha, which was a steamed rice flour fritters mixed in a tomato and capsicum mixture for Rs 950.

The classic Luci, Aloo Bhaji and Bilahi Ambol  are some of the other delicacies which will be served for the guests at the festival for Rs 950.

Pani pitha with narikol aru gur for Rs 650, which are rice flour pancakes filled with sweet coconut and jaggery are served as dessert, with Singpho tea to round off the meal.

So folks, if you are in Mumbai and missing your home, rush to Trident BKC Hotel and enjoy a sumptuous home meal.