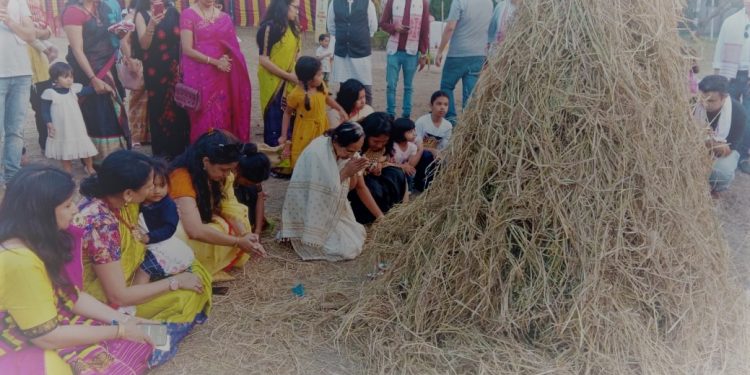 Assamese people residing in Pune witnessed a wonderful day long festivity on Sunday, with the celebration of Bhogali Bihu.

Assamese people residing in Pune witnessed a wonderful day long festivity on Sunday, with the celebration of Bhogali Bihu at the tranquil and natural environment of Military Hospital campus ground in Khadki.

It was organized by ASOMI, an organisation of Assamese diaspora of Pune.

Celebrated in mid-January, Magh Bihu, also called Bhogali Bihu is a harvest festival celebrated in Assam, which marks the end of harvesting season in the month of Magh.

It is the celebration of harvest by the indigenous ethnic groups of Assam similar to many ethnicities of South-East Asia.

After a feast in the night, a Bonfire (Meji) is lit in the morning for the ceremonial conclusion and prayer to the God of Fire.

During Magh Bihu, ‘uruka’ the night before the Magh Bihu has great importance.

People prepare  different food items like pitha (cake made of flour of rice), doi (curds), chira (dry rice), fish, meat, etc as well as they are prepared for the prayer to the god.

Axomiya Jalpan (Assamese snacks) was served at the outset of the event and then a drawing competition was organised amongst kids.

It was followed by bonti prajjyalan (lighting of earthen lamp) and jatiyo xongit poribexon (performance of state anthem).

Various activities were carried out like “Rossi tona khel” (tug of war), antakshri and performance of Assamese songs.

One of the main attractions of the event was organizing a lottery where the first prize was a country (local) chicken.

Other ethnic food items were also put up as prizes.

At the end, there was a cultural component to help people unwind followed by urukar bhoj, a lavish feast with various non-vegetarian delicacies prepared in Assamese style.