When Sumir Dewri was a student at the Dr Bhupen Hazarika Regional Government Film and Television Institute in Guwahati, his professor pointed out that his tribe, Tiwa (also known as Lalung), had never had a film in its own dialect. Years after he graduated from the institute, Dewri decided to make his directorial debut with the first feature film in Tiwa, titled Cholôma (2017), under his own production house, The Wild Lalungs.

Dewri and his small crew travelled 35km each day, climbing hills and surviving on wild leaves and different types of insects, through approximately 30 days of shooting.

Over the last few years, there has been a growing tendency among film-makers from Assam to make debuts in their native dialects, many of which have never been heard on film. This list includes, apart from Cholôma (Birth), Suraj Duarah’s Orong (Strangers In The Mist, Rabha, 2014) and Jaicheng Jai Dohutia’s Haanduk (The Hidden Corner, Moran, 2016).

These films, made on a shoestring budget, represent the milieu, daily life and issues of the ethnic group they spring from—groups that have gone unrepresented even in Assamese cinema.

Assam is an ethnically diverse society, and it isn’t easy to describe the characteristics of all the ethnic groups in detail because the boundaries between them are subject to continuous change. Though Assamese, Bengali, Bodo and Hindi are the most spoken languages in Assam, ethnic groups such as the Deori, Dimasa, Rabha, Tiwa and Hojai have their own dialects.

So, when an individual makes a film in a particular dialect, it reflects on, and explores, the diversity of a society. As critic Utpal Borpujari says, “Film-makers from every community would love to tell their own stories in their own language. Film-making in the ethnic languages is important to capture the highly diverse ethno-cultural space in the Northeast or Assam.”

The more prominent ethnic languages have been represented in Assam’s cinema over the years—films in Karbi, Mishing and Bodo, for instance, have been made since the 1980s. Today, other ethnic groups too are gaining representation.

Owing to bleak commercial prospects, it can be difficult for such films to find distributors and reach general audiences, as well as those from the particular community. They have found an audience at film festivals, and film-makers have resorted to public screenings.

Dohutia’s Haanduk, the first Moran film, won the Grand Jury Prize in the India Gold section at the Mumbai Film Festival in 2016. Dohutia believes that such screenings play an important role in creating awareness. 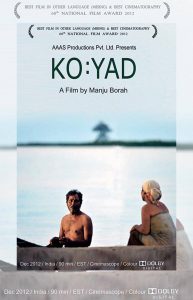 Haanduk has been screened at Kakopathar, Sonja, and Jorhat’s Jagannath Barooah College in the state, as well as at the Prabhat Chitra Mandal in Mumbai and the Kazhcha Film Forum in Kerala.

Duarah’s Orong won a National Award for the best feature film in Rabha, for 2014. And with the help of the All Rabha Students’ Union (ARSU), he held the first public screening of the film in the state at a convention at Tamulpur, in January. Screenings are now being planned in Rani and Dudhnoi.

Such films “not only help in capturing the ethnographic realism of that culture but also adds an element of authenticity in the storytelling,” says Janali Rabha, a college student from Goalpara and a member of the Rabha community.

Zintu Moran, who is from the Moran community and works as a clerk in the tea estates of Doom Dooma, Assam, felt the same way after watching Haanduk.

“Anybody who has experienced the tumultuous phase of insurgency in the 1990s will be able to relate with the film,” he says. “The film-maker has boldly portrayed the brunt of army operations among members of the Moran community.”

It’s not only debutants who are branching out. After directing six feature films in Assamese, the award-winning director Manju Borah made Ko: Yad (A Silent Way, 2012) in Mishing and Dau Huduni Methai (Song Of The Horned Owl, 2015) in Bodo.

“After travelling around the world, I realized that reflecting your own region in cinema is very important,” she says. “Assam has so much diversity in spoken languages and ethnicity. If I am not able to represent this rich tapestry through my cinema, I am incomplete as a film-maker,” she added.

The article originally appeared on Livemint