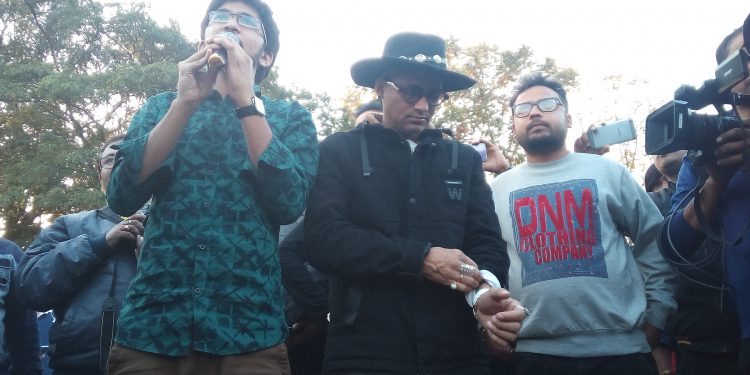 The protest programme organised under the banner of Kolaguru Art Foundation in association with the Zubeen fan Club and supported by AASU was attended by a host of artistes from across the state and voiced against then controversial Citizenship (Amendment) Bill, 2016.

Addressing the gathering Zubeen Garg urged all concerned of the society irrespective of their caste and religion to come forward to stand united against the government’s move to implement the Bill.

Zubeen Gard said that the Bill by which the government is trying to give more foreigners’ load to Assam, was posing a serious threat to the very existence of the indigenous people of the region.

“Till last drop of blood in our body we will fight against the issue for the interest of the indigenous people of the region.” Zubeen Garg said.

Attending the protest programme, artistes Garmia Garg, Nipen Hazarika, Durgamoyee Bora Pankaj Bordoloi among others also spoke against the controversial Bill and urged one and all to stand  united against the government until and unless they scrape the Bill.

However, the heart throb for the youngsters of the Assamese society at the sideline of the programme,  said the people of Assam would scrape this government if  the Bill is passed in the Upper House of the Parliament.