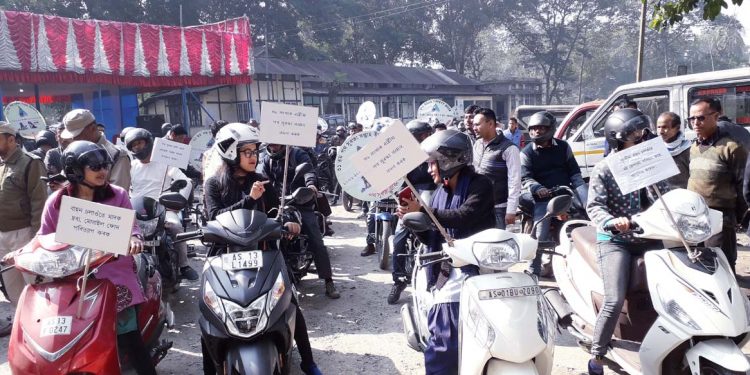 To make bikers aware about safety driving, a number of women bikers participated in a bike rally on the streets of Mangaldai in Darrang district on Sunday.

The bike rally was organized as part of the 31st National Road Safety Week observed by the under the aegis of the Darrang District Transport department.

The women bikers were seen wearing helmets and carrying placards with slogans asking the bikers not to drive after drinking, wear a helmet while driving, stop using mobile phone while driving and so on.

Mangaldai legislator Gurujyoti Das on Sunday ceremonially launched the week-long programme in a public function at the campus of the District Transport Office in Mangaldai.

The objective of the celebration was explained by motor vehicle inspector Padma Lochan Hazarika.

People from different walks of life including youth and women participated in the walkathon which was flagged by internationally acclaimed veteran master athlete Biren Medhi in presence of noted industrialist Mukul Ch Deka.

As a part of the celebration, the organizers on Saturday offered public felicitation to prominent stakeholders like doctor, traffic policeman and samaritans as Road Safety Champions.

To give a lesson to the traffic violators, the transport officials also greeted them with roses instead of imposing any penalty.

A free medical and vision check-up camp for commercial drivers was also held in this connection.

Several other programmes have also been listed for the week-long celebration which will continue till January 17.