Assam: Voices against CAA get louder in Dhemaji 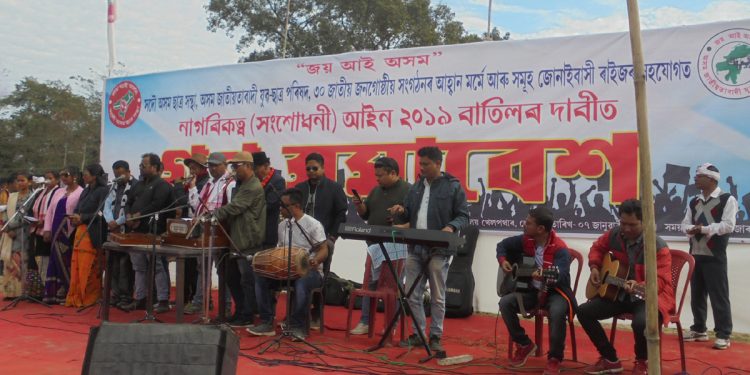 A view of the anti-CAA rally in Jonai. Image credit - Northeast Now

The voices against the Citizenship Amendment Act (CAA) 2019 get louder in Assam’s Dhemaji district as the AASU, AJYCP, and KMSS have intensified the anti-CAA movement.

The All Assam Students Union (AASU), Asom Jatiytabadi Yuba Chatra Parishad (AJYCP) and Krishak Mukti Sangram Samiti (KMSS) and other anti-CAA groups have pledged to continue the stir until the Centre scrapes the Act or exclude Assam from its purview.

The AJYCP, which is taking a pro-active role in a statewide protest against CAA, 2019 in the state, appealed to the indigenous people of the state to boycott the Bharatiya Janata Party (BJP) and its allies.

AJYCP general secretary Palash Changmai, while addressing a mass gathering at Jonai in Dhemaji district on Tuesday, alleged that BJP was contemplating free entry of a large number of foreigners into Assam through CAA for political gain.

He said by implementing the CAA, the BJP-led NDA government is working to ruin the languages and cultures of the indigenous people of Assam.

Changmai slammed the BJP-led government for the arrest of innocent people linking them with Maoists and said this would not be tolerated.

He held chief minister Sarbananda Sonowal responsible for the killing of innocent people by security forces and demanded his resignation on moral ground.

“The BJP is applying ‘divide and rule’ policy to derail the age-old unity among indigenous communities in Assam and trying to suppress the ongoing stir against CAA through various tactics. The age-old unity and peace in the state would be in trouble till the BJP is in power,” Changmai lamented.

The AJYCP leader cleared that the anti-CAA movement is neither a conflict between the Assamese and Bengalis nor Hindus and Muslims but it is a movement for the protection of the interests of the indigenous Assamese people.

Opposing the BJP’s peace rally, Changmai opined that the saffron brigade is trying to show its artificial strength after losing the people’s credibility.

Basumatary said Sonowal is running a ‘fascist’ government in Assam.

“The state government after failing to suppress the anti-CAA movement is adopting a fascination policy for the artistes and unemployed youths to woo them towards their side,” he added.

Basumatary also said chief minister Sonowal, finance minister Himanta Biswa Sarma and the Asom Gana Parishad (AGP) leaders have betrayed the local people for which the eminent citizens of the state are looking for an alternative political party to protect the interests of the indigenous people.

“The BJP-led state government is working against the interests of local people consequently. The indigenous people of Assam would give a befitting reply to them for their misdeeds in the forthcoming elections,” he said.

The members of the ‘Artists Society’ of Dhemaji also staged a protest against the CAA by performing patriotic songs and presenting other songs on the occasion.

They expressed apprehension that the new Act would make an adverse impact on the demography of the state and destroy the language, culture and traditional practices of the ethnic people in the state.

The mass gathering was organized by the Dhemaji district AJYCP in association with the All Assam Goriya-Moroya Deshi Jatiya Parishad, Jonai Muslim Samaj and 30 organizations of different ethnic communities.

The AJYCP will also organize another mass rally at Dhemaji town on January 9.