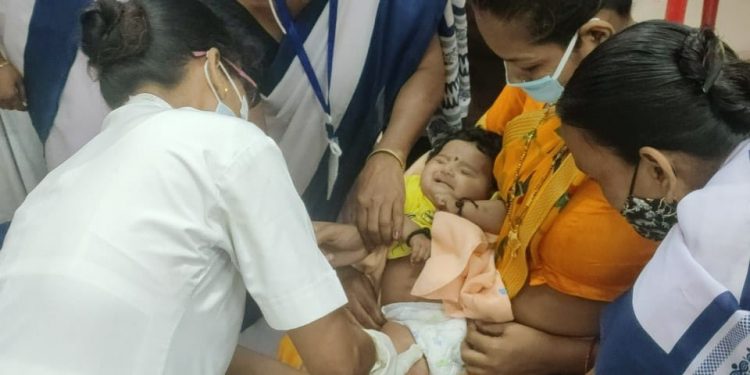 A child receiving the PCV at Dhubri

The Dhubri district administration on Wednesday launched the Pneumococcal Conjugate vaccine (PCV) drive under the universal immunization programme in the district.

The PVC helps reducing risk of morbidity and mortality due to pneumonia and meningitis in children.

Children who are six weeks old will be administered the first dose of the vaccine across the district in the initial phase.

The deputy commissioner directed all the officials concerned to make arrangements for the smooth conduct of the vaccination drive.

Joint director of Dhubri district health services SM Emdadullah said that three doses of the vaccine will be administered to the children.

The PCV drive is part of the routine immunization programme and all the children of 6 weeks, 14 weeks and 9 months will be administered the vaccine by strictly adhering to all Covid-19 protocols.

The district officials have also been asked to conduct extensive awareness among the public regarding the vaccine.

They are also to make periodic reviews on the successful rollout of vaccines.