After the rescue of two ONGC employees out of the three, who were kidnapped by the ULFA (I), the outfit claimed the third employee may have been killed either in Army firing or the Army-police are ‘hiding’ him.

Taking responsibility of the kidnapping of three ONGC employees, the ULFA(I) in a statement on Saturday said: “On April 20, 2021 night, the ULFA(I) and NSCN had taken three ONGC officials – Mohini Mohan Gogoi, Alakesh Saikia and Ritul Saikia – in their custody. After that, encounters took place from 10 at night to 2.30 am last night between ULFA and more than 500 armed forces personnel led by Indian Army’s 73rd Brigade, 35 Assam Rifles and Nagaland Police in effort by ONGC to get them released.”

“As a result, our cadres, keeping in view of the safety of the lives of the three ONGC officials, left them in a health status among the people of Tokok Singkhu village under Nagaland’s Mon district and proceeded towards our destination,” the ULFA statement issued by publicity wing member Captain Rumel Asom said. 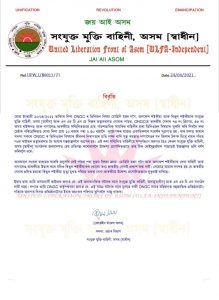 The outfit claimed, “Even after being aware of the facts, in order to downplay the image of ULFA(I) in the eyes of the public, the joint armed forces opened fire in the area after some time.”

Referring to media reports over the rescue of two ONGC employees, the ULFA(I) said: “Although the armed forces and Nagaland Police rescued ONGC officials Mohini Mohan Gogoi and Alakesh Saikia as per media reports, the Indian Army has not revealed any information regarding Ritul Saikia.”

“Therefore, we suspect that Ritul Saikia has either been killed in Indian Army firing or the Army-police are hiding him intentionally,” the ULFA(I) statement said.

However, an Indian Army official earlier said: “Operations are still underway to rescue another ONGC employee.”

“One AK 47 has also been recovered,” the Indian Army said.