In a joint operation, a ULFA-I over ground worker was arrested on Monday at Margherita in upper Assam’s Tinsukia district.

The apprehended OGW has been identified as Harijit Das, resident of Lahowal in Dibrugarh district.

He was involved in the recruitment drive of ULFA-I in various districts of upper Assam.

A major recruitment drive of ULFA-I was busted by the Army and police through their joint operation recently.

The arrest of the ULFA-I over ground workers is a major blow to the insurgent group. 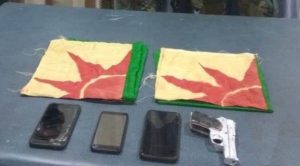 During the operation, one 0.22 mm pistol with one magazine, two ULFA-I flags and three mobile phones were recovered from his possession.

According to police, Das lured the boys to the recruitment drive.

Recently, in a joint operation by Army and police, several over ground workers of the outfit were arrested from upper Assam districts.

On the other hand, security forces on Sunday apprehended two militants, including one of the most-wanted leaders of the National Socialist Council of Nagalim (Isak-Muviah) faction, from Malugaon under Ledo police outpost in Tinsukia district.

The militant has been identified as self-styled Lt Col Ramping Hakhun alias Johnny, who has been wanted by security forces since 2011, and Kochung Sangkey.

They were arrested from an abandoned hut in the Malungaon area.

Security forces have recovered two pistol, one 9mm and one .22 mm-18 live rounds of ammunition, two magazines and Rs 10,000 in cash and one bag from their possession.

Meanwhile, security forces have launched a massive crackdown against the insurgent groups who have taken shelter in neighbouring Myanmar.

Amid Covid-19 pandemic, many of the rebels are trying to sneak into Assam and Arunachal Pradesh, according to security forces.