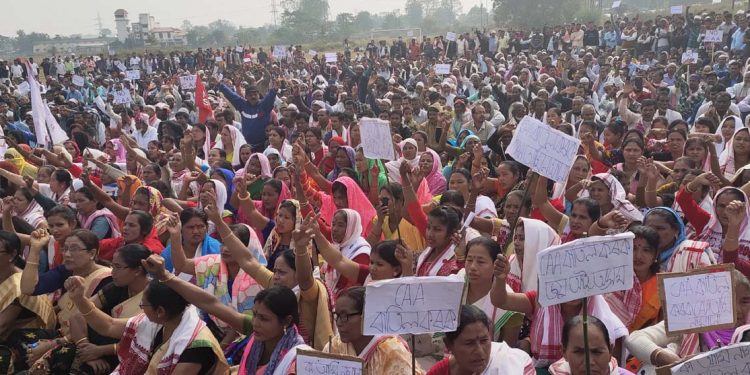 A view of protesters who voiced against CAA at Hojai on Sunday. Image credit – Northeast Now

Thousands of protestors on Sunday voiced against the Citizenship Amendment Act (CAA) in Hojai, where Rashtriya Swayam Sevak Sangh (RSS) has a stronghold.

The protest began from 10:30 in the morning and concluded at 3:30 in the afternoon.

Hojai is dominated by Bengali Hindus and Muslims.

Over 5,000 people turned up for the anti-CAA rally.

Bir Lachit Sena leader Shrinkhal Chaliha, who was recently released from jail after being arrested for protesting against CAA, lambasted both the Centre and state government for imposing CAA against the will of the people.

He said, “The Narendra Modi government only wants four things from us – coal, tea leaves, oil, and vote.”

Chaliha reiterated: “We will never accept CAA at any cost. It is a threat to our culture, language, and motherland Assam.”

He said, “If anyone wants to stay in Assam, the person must listen to the indigenous people and accept the language, the culture of the state or leave our motherland.”

Misuse of power by the BJP and RSS to suppress the voice of the people would not be tolerated, added Chaliha.

He said, “Dev is a small leader, but for political gain, he wants to create disharmony between the Hindu and Muslim community.”

Stating that CAA will make a huge impact on the culture and language in Assam, Bhuyan said, “If no community and culture is left then we will have no right to be alive as a third category citizen on our own motherland.”

He clarified that the statewide protests are not against the Hindu Bengali community but against all the Bangladeshis who came to Assam after March 24, 1971.

They appealed to the people to stay united in this phase of crisis in Assam.

Thousands of protesters from all walks of life shouted slogans like “BJP, RSS go back”, “CAA will not be accepted”, “Akhil Gogoi Zindabad”, “Release Akhil Gogoi and others unconditionally” and so on.

The Hojai branch of Marwari Yuva Manch distributed water among the protestors.