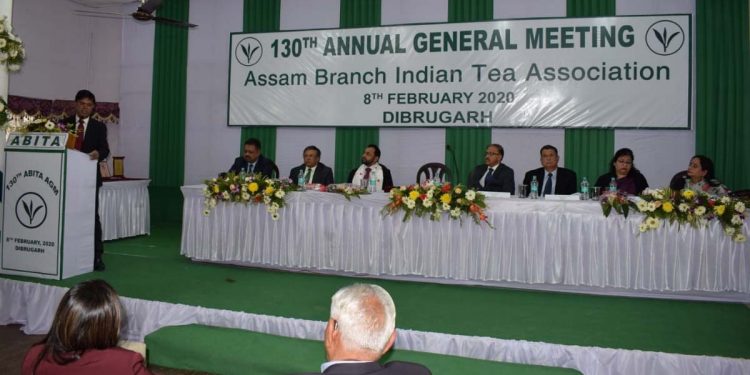 A view of the 130th annual general meeting of the ABITA at the Dibrugarh District Planters’ Club. Image credit – Northeast Now

Despite record production, the Assam tea industry has been facing a crisis, said the Assam Branch Indian Tea Association (ABITA).

According to the ABITA, the tea production in the state touched a record high in 2019 but the 180-year-old tea industry has been facing stiff challenges due to the decline in export and stagnant prices.

Addressing the 130th annual general meeting of the ABITA at the Dibrugarh District Planters’ Club here on Saturday, ABITA chairman DJ Baruah said Assam’s tea production in 2019 reached an all-time high of 715.79 million kg which was 51.5% of the all India production.

“There is an oversupply situation at this moment. At the same time, price realisation has remained stagnant since the last several years which is a matter of serious concern.”

“The tea industry which provides employment to millions of people is under severe stress at this juncture due to increasing cost of production,” he said.

The ABITA chairman further said the present crisis in the tea industry is in dire need of support from the government to enable the industry to survive and prosper and also considering the fact that millions of workers are entirely dependent on the industry for their livelihood.

“There is an urgent need for a relief package from the government to bail out the ailing tea industry,” said Baruah.

“We have made submissions to the Centre and state government highlighting the current challenges being faced by the tea industry and the urgent need for redressal to ensure the industry’s sustained growth,” he added.

The stakeholders of the tea industry have held interactions with the Department of Industries and Commerce, Assam, the Tea Board and the State Innovation and Transformation Aayog (SITA), Assam.

The procurement of ration for workers at high cost from the open market still continues despite the implementation of the National Food Security Act in Assam, the ABITA chairman claimed.

He appealed to the government to accord priority to the tea industry in the matter of supply of natural gas as it is one of the essential requirements for tea production, especially in upper Assam.

Expressing concern over the present situation in the tea industry, Indian Tea Association (ITA) chairman Vivek Goenka said the industry won’t be able to survive at the current price levels as costs of production has increased whereas prices have remained stagnant over the past 5 years.

“The majority of tea estates in Assam and West Bengal are selling their products well below the cost of production. In the past few months distress levels have resulted in sales, closures, and references to the insolvency tribunals,” said Goenka.

“This is a wake-up call for stakeholders to address the downslide urgently for short, medium and long term sustainability of the industry.”

“In 2019 despite record production, we have witnessed an unregulated increase in production, no export growth, consumption not keeping pace with production, increased costs at the farm-gate level and stagnant prices,” he added.

An exhibition by UNICEF was held on the occasion.