Informing about this remarkable success of Chandrayaan-2 mission, ISRO stated on its official Twitter handle: 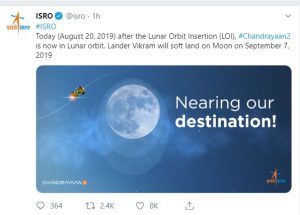 As per a notification released by ISRO, all the systems of Chandrayaan 2 are working successfully.

The health of the spacecraft is being continuously monitored from the Mission Operations Complex (MOX) at ISRO Telemetry, Tracking and Command Network (ISTRAC) in Bengaluru

The monitoring operations are being done with support from Indian Deep Space Network (IDSN) antennas at Bylalu in Karnataka.

India created a history on July 22 with the successful launch of Chandrayaan 2.

The Rs 978-crore Moon mission was launched from the second launch-pad at the Satish Dhawan Space Centre, Sriharikota, in Andhra Pradesh.

Among those responsible for Chandrayaan-2 successful launch, role of three scientists from Assam — J N Goswami, Dipak Kumar Das and Hidam Rajeev Singh, are worth mentioning.

Astrophysicist J N Goswami is the chairman of the advisory board for Chandrayaan-2 mission.