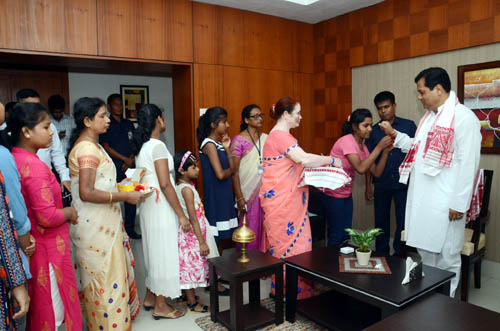 They children also tied Rakhi to the Governor of Assam Professor Jagdish Mukhi at Raj Bhawan in Guwahati on Sunday.

At Raj Bhawan the SOS team greeted the Governor  on Raksha Bandhan. They tied Rakhis to the Governor. On the other hand, At CM Guest House Bramhaputra they greeted him and tied Rakhi to Sonowal.

The Governor and CM interacted with the children. They said this festival would further strengthen the bonds of brotherhood, amity and harmony and would be a harbinger of peace, progress and prosperity in the State.

The Governor and CM thanked the children for tying Rakhis on them and wished them a bright future ahead.

On the other hand, SOS Children’s Village also Celebrated Raksha Bandhan at Hojai  with pomp and gaiety. The children along with their mother went to Hojai Police station tied rakhis to police officials and also celebrated this auspicious day at CV in Hojai.