This is in a bid to make healthcare facilities more accessible, affordable, accountable and yet advanced in the BTAD areas 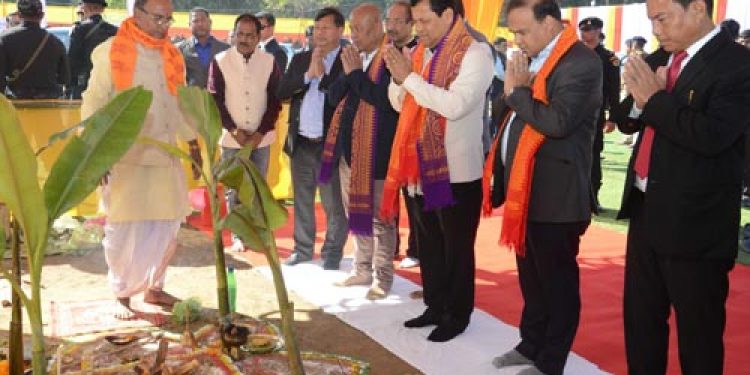 This is in a bid to make healthcare facilities more accessible, affordable, accountable and yet advanced in the BTAD areas.

The 500 bedded Kokrajhar Medical College and Hospital will have the intake capacity of 100 students for MBBS degree. The hospital will be built on a plot of land measuring 81.75 acre involving an approximate financial outlay of Rs. 382.70 crore and is projected to be completed within 30 months.

Speaking on the occasion Chief Minister Sonowal said that with the foundation stone being laid the long standing need for a state of the art medical college in BTAD areas has been fulfilled. He also termed the day as the red letter day in the history of BTC as he hoped that the proposed medical college will be able to impart state of the art medical education using advanced technology to the students especially belonging to BTAD areas.

Stating about the sequel of developments taking place in BTAD areas, Sonowal said that this has been possible because of the able leadership of BTC Chief Hagrama Mohilary. He also thanked Hagrama Mohilary for transforming BTAD area into an epicenter of development. The once violence ridden area has been turned into an area symbolizing peace, prosperity and harmony, Sonowal added.

Health and Family Welfare Minister Dr. Himanta Biswa Sarma while speaking on the occasion said that Kokrajhar Medical College and Hospital is the latest addition to the revolutionary changes that health sector in Assam has been witnessing under the BJP led coalition government in the state.

He also said that a Cancer hospital and a Mother and Child Hospital will also be set up adjacent to Kokrajhar Medical College. He also said that under Assam Mala scheme new bridges and roads will be built in BTAD areas to stimulate it’s connectivity.

BTC Chief Hagrama Mohilary speaking on the occasion gave a brief snapshot of the developmental activities taking place in BTAD areas. He also said a Sports Academy and Engineering college will also be built in BTAD areas.