Assam: Sonitpur dist admin imposes restrictions on sale, use of crackers, ahead of Diwali 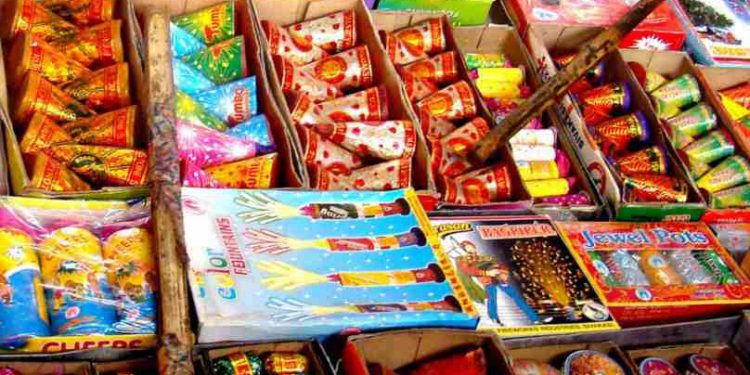 Sonitpur district administration imposes restrictions on sale and use of crackers Photo: Firstpost

The Sonitpur district administration under provisions of Section 144 Cr.P.C. has prohibited the bursting of sound creating crackers before 8 PM and after 10 PM during Diwali.

This order was given anticipating breach of peace and deterioration of law and order situation in the district during Diwali festival by anti social elements.

Citing an order by the  Supreme Court of India the district administration has also banned the manufacture/ sale and use of fire crackers generating noise level exceeding 125 decibel (A1) or 145 decibel (c) pk at 4 meters distance from the point of bursting.

Use of fire crackers at any time in the Silence Zones as declared by competent authority i.e., area comprising not less any 100 m around hospitals, educational institutes, court, etc., has also been prohibited.

Moreover, sale of fire-crackers on the side of public roads (both in town and rural area) except the designated areas by concerned competent authority, has been banned.

In addition, the district administration has also imposed various restrictions for sale and storage of firecrackers meant for sale. Wholesalers will be required to obtain separate permission for retail sale and only temporary retail license holders will be able to purchase firecrackers from wholesalers.

The order shall came into effect from October 30, 2018 and will remain in force until further order. Any violation of this order shall be punishable under provision of Section 188 IPC.