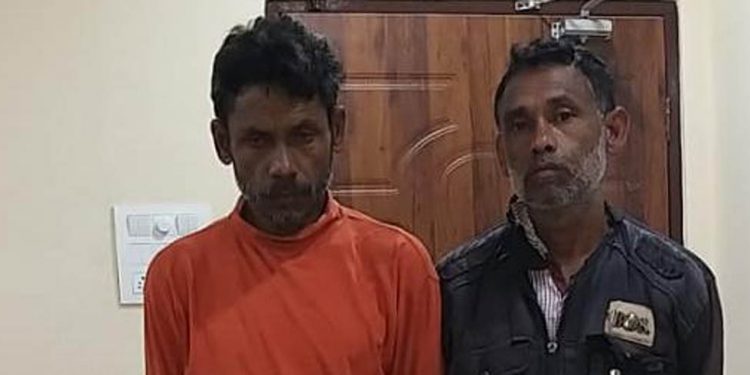 Jamirul Hussain and Sariful Hussain, who have been detained by police for attempting human sacrifice in Dimoumukh in Sivasagar

The police have detained Jamirul Hussain and Sariful Hussain, two brothers from Dimoumukh in Assam’s Sivasagar district for allegedly trying to sacrifice four minor boys, including their son.

They were preparing to sacrifice the boys on Saturday night in the hope of unearthing some treasure hidden under a mango tree in the compound of their house.

The duo had reportedly tried to make the human sacrifice on the advice of a quack in Moran and another in Sonari in Sivasagar.

They were assisted in the misdeed by their sister, Aisha Begum.

According to police sources, local villagers after knowing of the incident confronted the brothers on Saturday evening.

The accused admitted that they were indeed making preparations to sacrifice their son along with three other minor boys of the village to attain the hidden treasure.

The villagers handed them over to the police.

Although they have been interrogated, the police are yet to arrest them.

No FIR has been filed against them yet.

“We have interrogated the accused and investigation into the human sacrifice angle is on,” said the Sibsagar additional SP.

The two quacks will also be questioned in connection with the incident, police sources said.