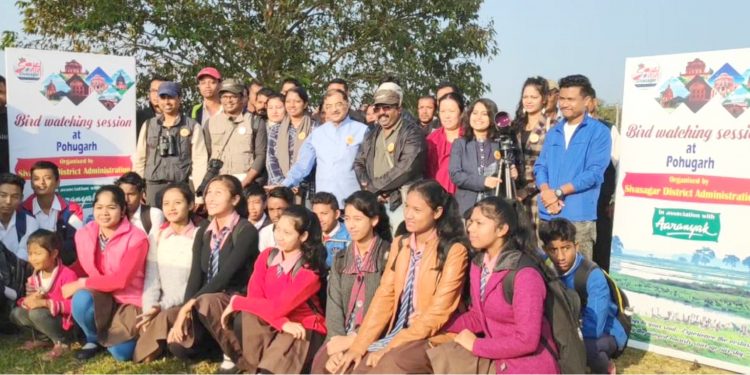 Sivasagar district administration organized the first-ever bird-watching session at the historic Pohugarh area of the district on Wednesday.

The unique event was organized in association with Aaranyak, a biodiversity research and conservation organization.

The programme was organized with a vision to develop Pohugarh as a much sought after tourist destination and to encourage bird watching in the area.

They deliberated at length on techniques of bird watching besides giving the participants a hands-on training.

They also provided special training to the tourist guides so that they can help the tourists by facilitating bird watching in the region.

A number of students and tourist guides participated in the programme that began at 6:30 in the morning.

Dr Deepi Rekha Kouli, director of Archaeology, Assam, was also a part of the delegation to have attended the maiden bird-watching session in the district.

Tarun Vijay, chairman, National Monuments Authority who was on an official visit to Sivasagar also spent some time in the programme.

He immensely appreciated the initiatives of the district administration under mission ‘Soulful Sivasagar’.

Attending the bird-watching session, the Chairman was of the opinion that with these efforts and alike, there is a bright possibility for Pohugarh to emerge as the first bio-diversity monument in Asia.

He also exuded confidence that with its rich bio-diversity and scenic beauty Pohugarh will attract both domestic and foreign tourists.

Bird watching sessions will be frequently organized at Pohugarh area, a haven for migratory birds during winter.

The district administration also decided to organize a winter fowl counting programme at the wetlands areas and in surrounding areas of ancient monuments in the district.

It may be recalled that Ahom Swargadeo Rudra Singha developed Pohugarh, a place near Jaysagar, as a natural zoo.

The area was arranged in a manner to retain the water body throughout the year to create it as a natural habitat for the wildlife and the avi-fauna.

The district administration had already imposed restrictions under Section 144 of CrPC of 1973 on activities like picnic, illegal fishing, hunting, littering and playing of loud music in Pohugarh area which create an unhealthy environment for the birds for nesting, rest and feeding ground.