The Dhubri district administration on Thursday promulgated Section 144 of CrPC to maintain law and order in the district with immediate effect.

Additional district magistrate (Magistracy Branch), Dhubri N Bhagwati in his order stated that in view of immediate prevention to human lives, property and public peace and human tranquility, Section 144 of CrPC has been promulgated throughout the district with immediate effect.

He said following the imposition of Section 144 CrPC, five or more than five persons would not be allowed to assemble at any public place nor they can take out any procession without the permission of the district administration.

No one will be allowed to raise slogans, organise rally and demonstration, wall postering, carrying of any weapons, wearing of combat dress etc will also be strictly prohibited, the order said. 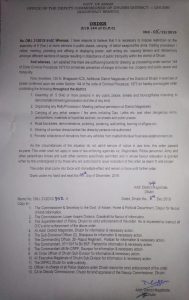 Additional district magistrate Bhagwati in the order said: “…I have reasons to believe that it is necessary to impose restriction on the assembly of 5 (five) or more persons in public places, carrying of lethal weapons/fire arms, holding procession / rallies, meeting, picketing and affixing or displaying poster wall writing etc. causing tension and disharmony amongst different sections of people resulting in disturbance of public tranquility within the district of Dhubri.”

He also said: “…I am satisfied that there are sufficient grounds for drawing up proceeding under section 144 of Code Criminal Procedure 1973 for immediate prevention of danger to human live property and public peace and tranquility.”

“As the circumstances of the situation do not admit service of notice in due time, this order passed ex-parte,” the order said.

“This order shall not apply in case of law enforcing agencies viz. Magistrates, Police personnel, Army and other paramilitary forces and such other persons specifically permitted and in whose favour relaxation is granted either by the undersigned or by those who are authorized to issue relaxation of this order as deem fit and proper,” it added.