Assam SDRF: Showing resilience in the face of adversity 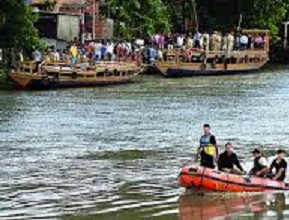 SDRF personnel conduct a search operation in the Brahmaputra in Guwahati on Thursday. Photo Credit - telegraphindia.com

The State Disaster Response Force (SDRF) Assam is working with limited resources at their disposal. It is not equipped with proper devices to retrieve something from water if it is beyond 25 feet from the surface.

A report published in the The Telegraph stated sources as saying that to go beyond 25 feet below the surface, a diver needs helium cylinder. The SDRF does not have any such cylinder. SDRF divers use scuba (self-contained underwater breathing apparatus) cylinders, where air is kept under pressure. Such a cylinder with 11 litres of air can be used for a maximum period of one-and-a-half hours. The SDRF has 30 scuba cylinders.

The report further stated that the Brahmaputra, whose drainage area is 70,634 square km in Assam, can be over 300-feet deep. The SDRF, set up in 2012, has 60 divers, who have been trained at Sea Explorer Institute in Kolkata. The practical training of the divers takes place at Babughat. Despite being just six-year-old, the SDRF has been offering its services in several emergencies and disaster situations.

On Wednesday, SDRF personnel succeeded in retrieving the car, which drowned in Dikhow river in Sivasagar district in Assam with five passengers. It is also involved in the rescue operation of a mechanised country boat, which capsized in the Brahmaputra on Wednesday in Guwahati.

The SDRF boasts of 100 inflatable rubber boats, three fibre reinforced plastic boats and 10 high-density polyethylene boats to use in rescue operations. “These boats have been kept in 50 different stations of Assam,” said the source. Undercurrent, muddy water, depth and underwater stones are some of the challenges faced by the divers in the Brahmaputra. “During the monsoon, the water becomes so muddy that you cannot see an object even a few inches from you,” a diver said.