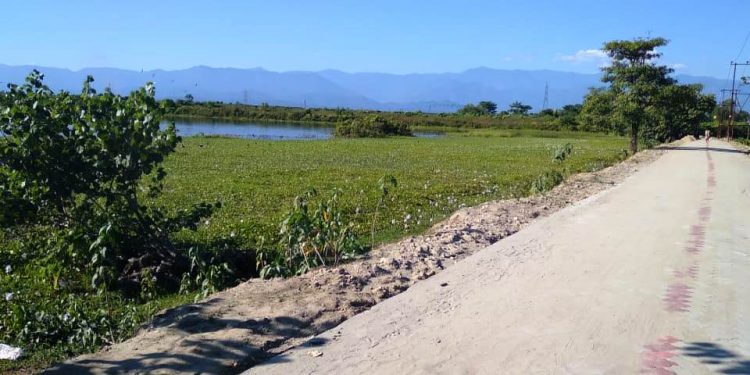 The famed Satajan wetland, known for visit of migratory birds in the winter on the banks of Ranganadi river in North Assam’s Lakhimpur district, has faced threat as works of a road project was carried out by Lakhimpur APWD-Rural Roads under the Assam Darshan scheme.

However, objections raised by various environmental organizations have made the district administration to divert the road project away from the wetland.

In January this year, the Lakhimpur Rural Road Division of APWD called for a tender for the construction of a road for Satajan Bird Sanctury under Assam Darshan for the year 2019-20. 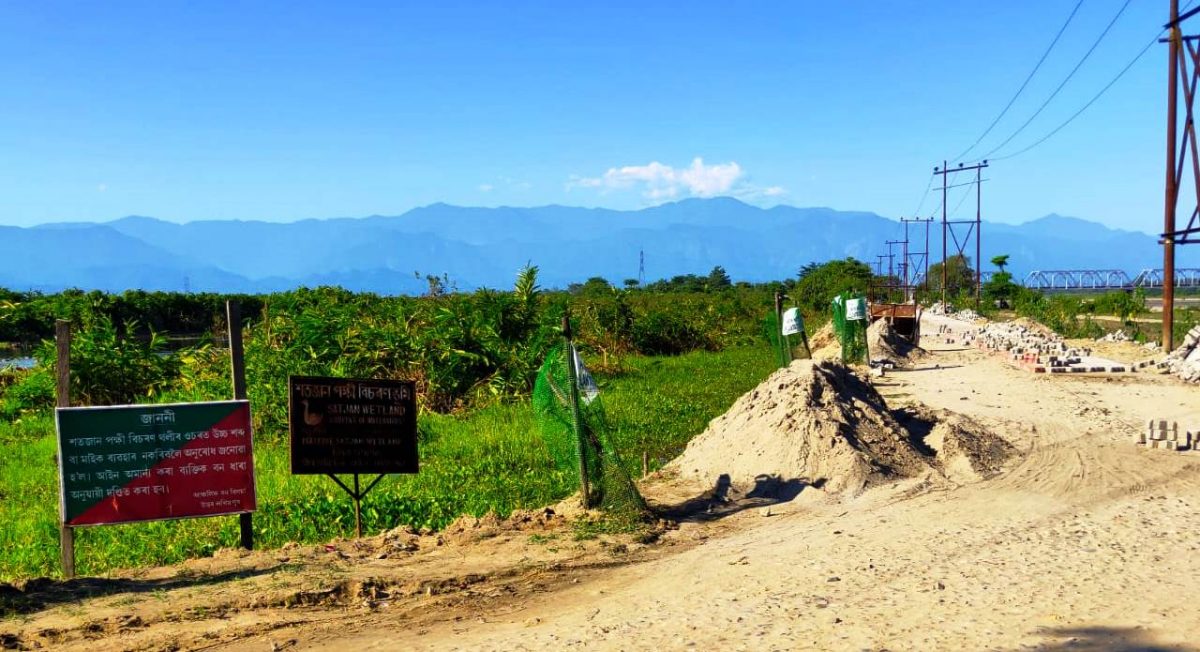 The work on the Rs. 53, 03,759 project was started on the pre-existing agriculture bund close to the wetland on the right-hand bank of Ranganadi river under Nowboicha Revenue Circle of Lakhimpur district violating the Wildlife Protection Act, 1972.

The noise of earth movers and other heavy machineries during the construction of the road with paver blocks, the frequent movements of various vehicles have disturbed the environment of Satajan wetland which greatly affected the coming of the migratory birds this season so far.

The numbers have drastically fallen this time as winter sets in the wetland. The road project, executed by APWD-Lakhimpur-Rural Roads also ignored the Wetlands (Conservation and Management) Rules, 2017.

In January this year the Union ministry of environment, forests and climate change, came out with guidelines to support state governments in the implementation of the rules for conservation and management of wetlands in the country.

Similarly, the Ramsar Convention, which is an international intergovernmental treaty for the conservation of wetlands, to which India is a signatory, defines wetlands as “areas of marsh, peatland or water, whether natural or artificial, permanent or temporary, with water that is static or flowing, fresh, brackish or salt, including areas of marine water the depth of which, at low tides, does not exceed six meters”. Satajan wetland falls under these definitions.

It is a unique habitat of aquatic flora and fauna with as many as 34 species of residential and 13 species of long-distance and altitude migratory birds.

The Satajan Wetland is known as the breeding ground of lesser and large Whistling Teal, White Breasted Water Hen and Bronze Winged Jacana.

It is also the nesting ground of Indian Purple Moorhen and Coots and the visiting site of the endangered white eyed Pochard, a migratory bird from the Pacific Siberia.

The threat to Satajan wetland due to the road project prompted various environmental conservation groups of Lakhimpur district to complain before the authority.

Lakhimpur Deputy Commissioner Jeevan B intervened in the matter following complaints and initiated steps to protect the wetland.

He asked the Lakhimpur APWD to stop the road construction on the agriculture bund and divert it 15 meters away from Satajan wetland towards the Ranganadi river.

He also suggested for plantation of trees in the gap area between the road and the agriculture bund.

The DC is also taking initiatives to secure the threatened Satajan wetland for its total protection. However apprehension remains for nature lovers following Lakhimpur-APWD’s irresponsible stand on the road project.

The executive engineer of Lakhimpur APWD on being asked over the matter said that the road on the agriculture bund of Satajan wetland would be converted to a walking zone.

But this will also be a violation of all existing environmental protection laws.

There have been allegations by the public that the road construction work was going on during night time despite the initiative by the Deputy Commissioner for the protection of the wetland.