Police had to resort to firing after an unruly family indulging in some rituals created ruckus by attacking locals, journalists on July 6 last

The temple where the family members performed ritual at Ganakpara village under Kalaigaon PS in Udalguri. Image: Northeast Now

The National Human Rights Commission (NHRC) has sought a report from the deputy commissioner and superintendent of police of Assam’s Udalguri regarding firing by security forces at Ganakpara village near Kalaigaon in Udalguri district on July 6 last.

The NHRC passed this order based on a petition filed by human rights campaigner and president of Human Rights Forum, a local NGO Sailen Kumar Sarma. 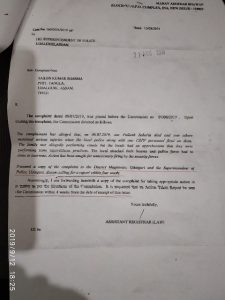 The SP and DC offices have been directed to file the report within four weeks.

The petitioner alleged that the family of the school teacher Jadav Sahariah was performing some rituals at their residence in Ganakpara village near Kalaigaon in Udalguri.

Besides a 15-year-old teenager, a relative of Sahariah’s and father of Pulakesh, Jadav Sahariah, 58, sustained bullet injuries.

The complainant in his petition has sought adequate compensation to the victim family.

Pertinently, the deputy commissioner of Udalguri had also conducted a magisterial inquiry into the incident by sub-divisional officer (Civil), Bhergaon.

“Taking into account the versions of eyewitnesses of the incident I have already submitted my findings to the deputy commissioner, Udalguri,” said SDO (Civil) of Bhergaon,Gakul Chandra Brahma.

“They chased and attacked the locals, journalists and police with axe and stone. Luckily no one suffered major injuries,” he added.

He further added that police tried their level best to pacify the family for nearly two hours and even resorted to use of water canons to mobilize the family but in vain and after magistrate’s order blank fired and later shot them below the knees in self-defence.