Assam reported 876 new Covid19 positive cases on Saturday while two more persons died of the infection in the state on the day.

The Assam health minister informed that the new cases were detected out of a total of 43,268 tests.

He informed that the Kamrup Metro district alone has reported 360 new positive cases.

According to the Covid19 bulletin published on Saturday (April 17, 2021) by the health and family welfare department of Assam & National Health Mission, Assam, two more patients died of Covid19 in the state in the last 24 hours.

The deceased were reported from the Kamrup Metro and Kamrup Rural districts. 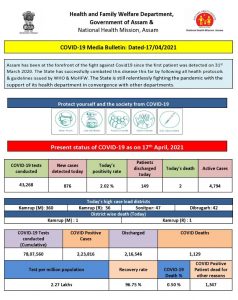 According to the Covid19 bulletin, 149 people were discharged after their recovery from Covid19.

With the death of two more persons on Saturday, the state’s death toll increased to 1,129 on Saturday.

According to the Union health ministry, India’s daily new cases continued to rise and 2,34,692 new cases were registered in the last 24 hours.

Delhi, which is one of the worst-hit states in India, reported 24,000 new Covid19 positive cases in the last 24 hours.

The national capital registered 141 Covid19 deaths in the last 24 hours which is the highest single-day toll in Delhi, said a media report.

On Saturday, Maharashtra, Delhi and Kerala recorded highest ever single-day spike in Covid19 cases with 67,123, 24,000 and 13,835 infections respectively.

With 120 deaths, Uttar Pradesh reported its largest one-day toll in the last 24 hours.