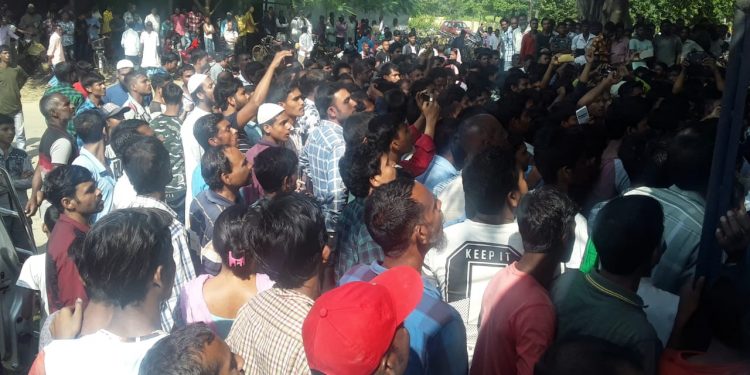 They protested in front of the Matia police station demanding safety of life and property from a lone wild elephant which has killed five persons in last 24 hours in the areas.

“We demand immediate translocation of the wild beast which alone has taken more than ten lives in last few years and human lives are not less important than a mad elephant,” said Nani Das, a front line lical social worker.

The protesters agitated for about two hours and stopped the local police to take away the body of the elephant death victims to Goalpara civil hospital for undergoing postmortem.

However, later, Gautom Mazumdar, ADC and SB Sarma, superintendent of police briefed the agitators of all the initiatives taken by the administration, as per direction of the chief minister, to capture the pachyderm.

They were also informed about the advent of the wildlife experts to tranqulize the elephant and the compensation being provided to the victims which returned the situation to normalcy and the bodies were sent for the postmortem.

The district administration, as announced by the chief minister on Tuesday, handed over the cheques of 4 lakh each to the next of the keen of the deceased as an ex-gratia.

Varnali Deka, deputy commissioner, while interacting with media said about the incident, ‘the elephant has been separated from its herd and chasing people whoever is coming on its way.’

Meanwhile, two teams, one from the Manas wildlife sanctuary and another team, consisting tranqulising experts, from Kolkata has been deputed to deal with the translocation of the elephant to a safer forest.

“We are leaving no stone unturned to tranqulise the jumbo and pacify the situation,” said Jibanananda Hazarika, DFO, Goalpara.

A high level forest department officers like the Chief conservator of forest of Lower Assam and his deputy, is camping in the district and supervising the entire operation.

On the other hand, several teams of the forest department failed to locate the huge animal as it suddenly disappeared from its fifth kill last night at Hahsorabori village near Upper Boguan under the Matia police station and forest range.

This time, the pachyderm targeted a lady of 42 years who was later identified as Hasan Bhanu. The others who have already lost lives on Tuesday are Tiken Ch. Nath, Jahanara Khatun, Minoti Kalita and Mizanur Islam, a class five student.

Significantly, both Mizanur Islam and Jinti Kalita, the daughter of victim Minoti Kalita are from the Matia high school. On Wednesday, the school held a condolence meeting. ‘We are speechless at this tragedy’, said Damborudhor Baishya, a school teacher.

Earlier, in the morning, the forest rangers had to face public protest and humiliation as the people ventilated their grivence against the department officials. The area falls under the Rongjuli range forest.

There is a permanent elephant herd of 25 members in the district taking shelter in the Pancharatna hill and Rongagora area. However, this herd rarely encroaches to the Rongjuli range forest.

On the other hand, the elephants of the Rongjuli range forest are mostly migrated from the neighbouring Meghalaya hills.

Of late, the alarming illegal cutting of the forest in Meghalaya has compelled the herds to comedown to Goalpara and Kamrup district forests for food and shelter.