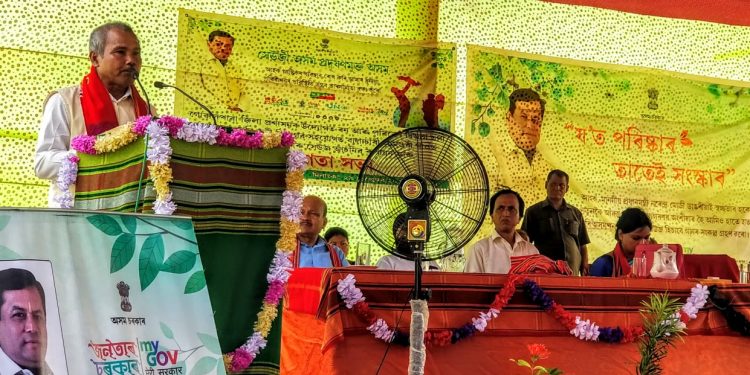 With the aim to create environmental awareness among the people and work collectively in implementing anti-pollution measures in Assam districts, the state government has been organizing a conservation initiative, ‘Chief Minister’s Clean and Green scheme’ in the state.

As a part of this,  the Forest and Environment and Public Health Engineering department took up an initiative at Balasari Amguri village under Lakhipur Circle of Goalpara district in Lower Assam and declared it as a ‘Clean and Green’ and  pollution free in a meeting held on Saturday.

Attending as the Chief guest, ‘Forest Man’ Padmashri Jadab Payeng emphasized on making compulsory the environmental science subject at  the school level. ‘This would be meaningless to distribute thousands of saplings on world environment day if we cannot create a healthy and strong sense of environment preservation among the people’, said he.

He further said that care and protection of the existing trees are important than the sapling plantations. The famed environmentalist also shared his long forty years experience in the field and the right method of plantation and preservation.

Delivering lecture on the importance of tree plantation, Varnali Deka, Deputy Commissioner, said, ‘one tree is equal to the power of ten sons.’ She further said that public cooperation is essential to retain a clean and green environment.

Himjyoti Talukdar, representative of ‘My Government Assam‘, briefed public that as a part of the Chief minister’s new initiative, total thirty three villages in thirty three districts will be declared as ‘Clean and Green’ village. Additional deputy commissioner Nur Hussain and circle officer, Preetom Das also focused on the issue.