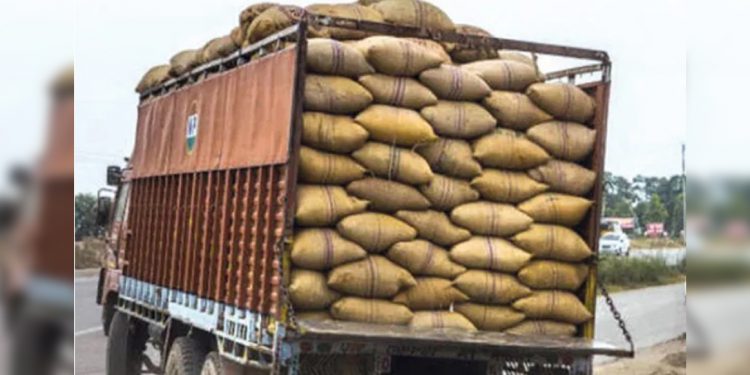 Assam Police has seized one lakh bags of rice of Food Corporation of India (FCI), from a private godown in Kamrup Rural district as the essential commodity was being readied for sale in the market.

According to a media report, the rice bags were seized during a joint operation conducted by the Assam Police and the Kamrup (Rural) district administration.

It has been reported that the bags of FCI rice were recovered recently from the godown of a private company in Chhaygoan Industrial Development Centre, Chhatabari under Boko police station in Kamrup Rural district.

The report quoted senior officials as stating that the illegal act came to light after villagers of Nadiar Par observed suspicious movement of a rice bags-laden truck and informed the police.

The rice bags were seized by a team led by the officer-in-charge of Boko police station, Sanjeet Roy and Chhaygoan circle officer Jayanta Borah.

After the interrogation of the driver and handyman of the truck, the huge irregularities taking place in the godown of the private company came to light, the report said.

The report quoted a senior official as saying that they had seized one lakh bags of FCI rice, each weighing 50 kg from the private godown.

The official said the private company was repackaging rice in their own brand and then was sending it to Meghalaya.

A total of 13 trucks, used for transporting the food item, were also seized by the team from the godown and its neighbouring areas.

The report quoted officials in Assam as saying that it was found during preliminary investigation that the private company sends rice to Meghalaya after repackaging.

The company also sends rice to other places and it is suspected that a huge racket is involved in it.

The company involved in the re-packaging has been identified as Maruti Quality Products Pvt Ltd (MQPPL).

Deepak Agarwal, who owns MQPPL and its godown, is currently absconding, according to the report.