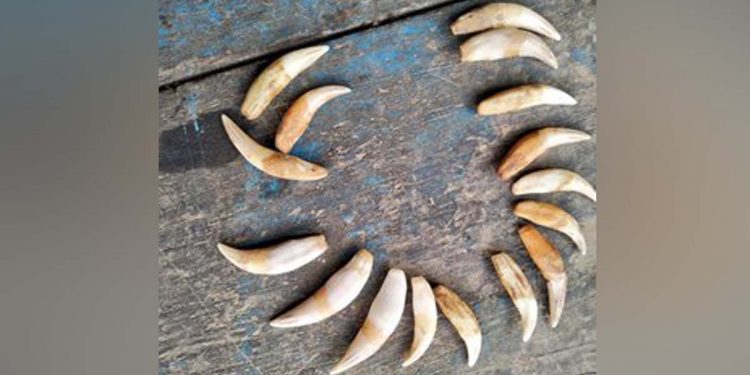 Police during an operation on Wednesday recovered 16 tiger teeth in Diphu of Karbi Anglong district and arrested four poachers.

According to reports, on the basis of specific inputs, an Assam Police team on Wednesday launched an operation at the Birla area under Manja police station in Diphu, the district headquarters of Karbi Anglong.

During the operation, the police team recovered a consignment of 16 tiger teeth.

The team was also able to arrest four poachers on charges of possessing the tiger teeth.

The police team was led by the deputy superintendent of police (headquarters) of Karbi Anglong, Nahid Karisma and the officer-in-charge of Manja police station.

Police have started an investigation into the case.

The forest officials had recovered a huge quantity of tiger skin, bones, nails and teeth of Royal Bengal tigers in a Tata Magic on National Highway 37.

The divisional forest officer of Kaziranga National Park said the items were meant for sale.

Sources had claimed the tiger was killed in the dense forests of Karbi Anglong.