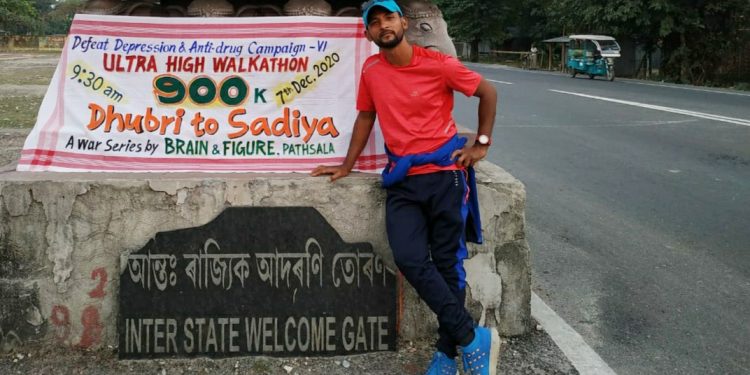 Khanin Roy, who will walk a distance of 900 kms to promote mental health among youths in Assam

Khanin Roy, a youth from Pathsala in Assam’s Bajali has undertaken an arduous journey to spread awareness on drug addiction and depression among the people of Assam.

The youth began his journey from Dhubri district and will walk to Sadiya along the Assam- Arunachal border.

He has undertaken this unique endeavour to walk a distance of 900 kms under the ageis of Brain and Figure, a Pathsala based organization.

The organization aims to generate awareness and promote good mental health among people in society.

Roy said, “Depression is one of the leading causes of suicide in India. Suicide itself is the second leading cause of death among young Indians.”

“Depression and drug addiction have forced many youths to take the extreme step even in trivial matters that otherwise, can be solved,” he said.

Roy further said, “The youths of today must restrain themselves from the virtual world and instead pursue physical activities like swimming, cycling, walking and yoga to stay spiritually awake and mentally and physically fit and active.”

The latest data released by National Crimes Record Bureau (NCRB) reveals that more than 1.39 lakh Indians died by suicide in the year 2019, of which 67 per cent were young adults (18-45 years).

The NCRB report titled ‘Accidental Deaths and Suicides in India 2019’ shows that of the total 1.39 lakh suicides, 93,061 were young adults.

The overall suicide figures rose by 3.4 per cent in the same time.

Hanging was found to be the most common method of attempting suicide.