Assam: One protester from Laika and Dodhia dies, four hospitalized in Tinsukia 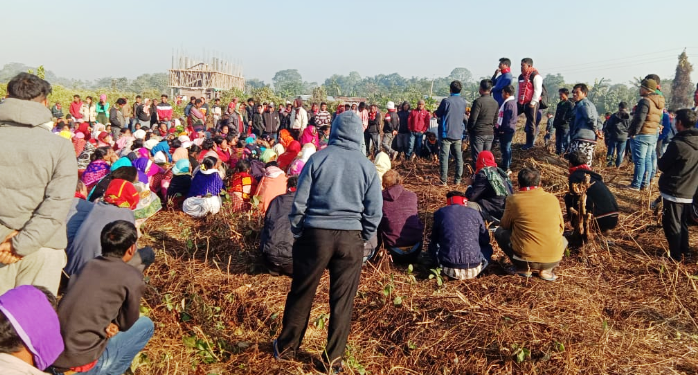 The villagers of Laika and Dodhia in Tinsukia district have been protesting since December seeking rehabilitation of around 1,480 families.

One protester from Laika and Dodhia died and four others fell ill on Thursday in eastern Assam’s Tinsukia district.

Three women and a child, who suddenly fell ill in the makeshift camp near Tinsukia deputy commissioner’s office, were taken to Tinsukia Civil Hospital.

70-year-old Bolen Dang died on Thursday after going back to Dodhia Sarisutia village from the protest site in Tinsukia.

The villagers of Laika and Dodhia have been protesting for the last 24 days at Lezaihola Borguri near Tinsukia DC office seeking their rehabilitation.

“Four of them were taken to Tinsukia Civil hospital in a serious condition. A 70-year-old died today at his village. He participated in the protest and returned to his village on January 5. The people were experiencing a lot of health problems due to severe cold in the makeshift camp,” Apio Taid, member of Laika-Dodhia Rehabilitation Committee told Northeast Now over the phone from Tinsukia on Thursday.

The residents of the two villages located inside the Dibru-Saikhowa National Park have been residing there since they were displaced by the great earthquake of 1950.

While Laika falls under Tinsukia district, Dodhia comes under the adjoining Dibrugarh district.

The villagers, who belong to the indigenous Mising tribe, mostly displaced people from Dhemaji and Dibrugarh districts, have been residing in the two forest villages for the last 70 years.

However, since India’s Wildlife Protection Act of 1972 prohibits any kind of human settlement within a national park, no development has been carried out in the two villages.

Earlier a 24-year-old pregnant woman, Kusmita Morang, died at the AMCH in Dibrugarh.

She joined the protest with other villagers but suddenly her condition deteriorated at the camp. Kusmita died when he was undergoing treatment at AMCH.

On December 30, a 55-year-old woman, Rebati Pao died after she going back to her village from the protest programme.

On December 30, chief minister Sarbananda Sonowal constituted a Committee to find a logical and everlasting solution for the rehabilitation of the families of Laika and Dodhia villages.

The chief minister asked the environment and forest and revenue and disaster management departments to permanently rehabilitate the families by January 31.