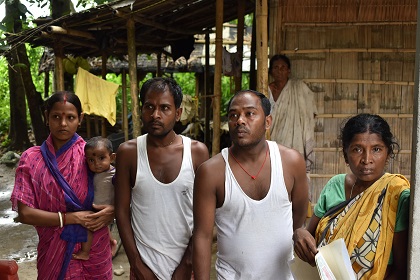 With only one day to go for the final draft of the National Register of Citizens (NRC) to be published on July 30 in Assam, 30-yr-old Jutika Das’s fate hangs in balance. She belongs to Amraghat in Silchar in Assam. In fact, there are millions of people like Jutika in Assam who are spending sleepless nights wondering if their names will appear in the citizen registry final draft on Monday.

A BBC News India video showed Jutika as saying, “My husband has been in a detention camp for the last two and a half months. My Indian citizenship wasn’t questioned but his case is pending before the Foreigners Tribunal.”

On Monday, millions of people in Assam will find out if they are no longer Indian citizens. Jutika’s husband’s family migrated from Bangladesh before 1971 but the situation is anything but “rosy” for him.

The video further showed Jutika as saying, “We have two children and our eldest daughter has autism. I am struggling to run our grocery shop and had to ask my brother for help. The lawyer’s fees also have to be arranged. There is so much to think about. Should I look after my children, cook or manage the shop? I am scared. After all, my husband’s fate hangs in the balance.”

In fact, arranging lawyer’s fees for people who have been marked by the Election Commission (EC) as ‘D’ voter is a Herculean task. The poor people in Assam who have been marked ‘D’ voters are moving heaven and earth to prove their citizenship and even selling off whatever little land and livestock they have to pay the lawyer’s fees. Some have even taken the extreme step of committing suicide not being able to cope up with the expenses and the pillar-to-post running involved.