Assam: No initiative to repair dilapidated roads in Dhubri town 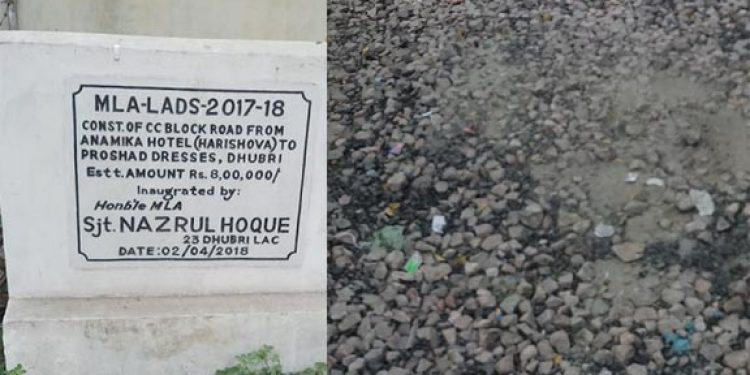 The foundation stone which was laid to repair a road on April 2, 2018, but nothing has been done so far. Image - Northeast Now

With just a couple of days left for Durga Puja festivities to begin, roads in Dhubri town remain in very bad conditions with deep potholes.

Roads have been in dilapidated conditions due to water-logging and poor maintenance since long, but neither the municipal authority nor the Public Works Department (PWD) has taken any initiative to fill the potholes.

Traffic will definitely come to a standstill during busy hours and festival days too.

The busy NS Road, Station Road, RK Mission Road, Garikhana Road and Chairman Road of Dhubri town are in dilapidated conditions which will create a major traffic bottleneck during the festive season.

The road starting from Income Tax office to Jogmaya Ghat via SP Higher Secondary School of Dhubri town is also in a very dilapidated condition and is not even fit for walk.

The deep potholes in front of the Shiva Temple near Harisabha turn fatal for commuters, especially the two-wheeler riders.

S Pal, a local resident while expressing his concern over the matter, said that it is really surprising that Dhubri MLA Nazrul Houqe in presence of the chairperson and Chief Executive Officer of Dhubri Municipal Board had laid the foundation stone for repair of the aforesaid road with an estimated cost of Rs 8,00,000, on April 2 this year, but even after six months, no repair has been initiated for reasons best known to the authority concerned.