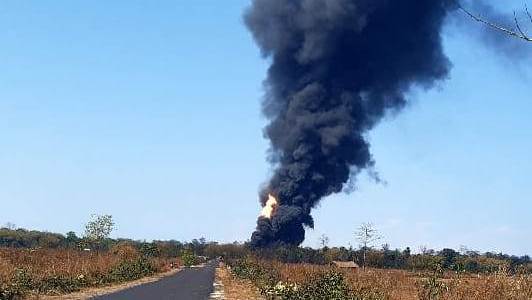 Repairing job of another road Talap–Kordoiguri–Bandarkhati-Bhaghjan EPS is also in progress and 80 per cent job is completed.

After the massive flood the Doomdooma – Baghjan RCC bridge was damaged and the work at the Baghjan blowout site has been stalled.

However, civil work for building safe walkways, passages etc in and around the site in water submerged areas and temporary sheds for equipment etc are being carried out continuously as per requirement.

“Debris removal operation, which was again resumed yesterday after little improvement in weather condition, is in progress at the time of reporting and shall continue for the day. A total 10 loads of debris were removed yesterday from the well plinth to debris laydown,” said an OIL official.

“The main road was damaged due to the recent wave of flood and now another road has been used for the work,” Gohain said.

Gohain said, “Maguri- Motapung beel was affected after the blowout at Baghjan 5 Oil well. The condensate/ oil damaged the whole beel after flowing of the condensate in the entire beel. Due to flood the condensate are flowing to other water bodies. Recently, after flood we have found carcasses of fish floating in the water body”.

Noise monitoring was carried out in Guijan side, while air monitoring could not be initiated as the area was waterlogged.

Consultation with local people was carried out as a part of the ecological survey in Baghjangoan and Notungaon.