Assam: Morigaon gears up for Jonbeel Mela from January 17 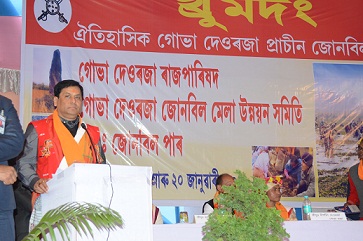 The famous Jonbeel Mela will start from January 17 along the bank of Jonbeel, a large natural water body shaped like a crescent moon situated in Morigaon district of Assam.

The three day programme this year is expected to attract tourists from outside the state apart from the local people.

The Jonbeel Mela is an annual extravaganza which is generally held from the first Thursday after the Magh Bihu.

During the second day of the Mela, indigenous communities and tribes of the hilly areas come down and interchange their merchandise with the people of the state in a barter system.

After the interchange is over, the people observe Bhogali Bihu from the following Saturday.

The fair reflects the traditional harmony and brotherhood that exists among the various indigenous communities and tribes of Assam.

It is said that the fair was started during the 15th century under the auspices of the then Gobha king of the Tiwa kingdom.

The Jonbeel Mela is supposed to be the only fair in the country that has kept the age old traditional barter system alive even today.