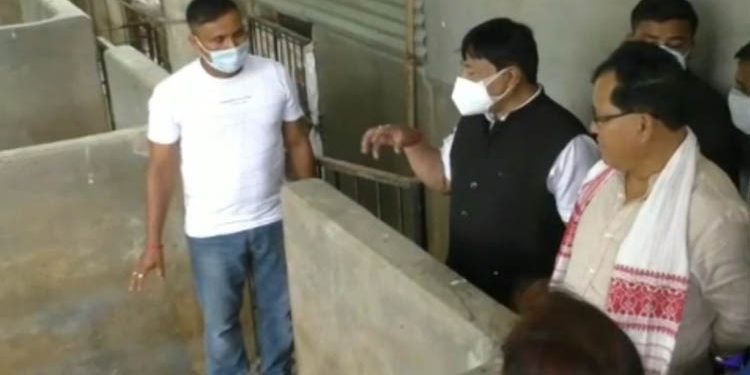 Assam agriculture and veterinary minister Atul Bora visited the villages, including Akalibari, in Darrang district which have been affected by African Swine Fever.

Uncertainty looms large over the compensation to the pig rearers of Darrang district, who have suffered huge losses due to the deaths of pigs in their farms following the outbreak of African Swine Fever, as the minister did not make any assurance on compensation.

The veterinary minister said he will have to discuss the matter of compensation with the chief minister.

“We have been informed both by the farmers, department and local MLA that altogether 246 pigs have died due to African Swine Fever,” minister Bora said.

“Earlier, the virus of African Swine Fever spread last year and we thought that its infection was over. Unfortunately, it is recurring during this pandemic,” Bora said.

“We will discuss the matter with the chief minister how the affected farmers may be supported. The compensation will be paid to the farmers, whose pigs were culled, as per norms,” he added.

The minister said there is no possibility of spreading the virus to human beings and directed the district authorities to maintain measures so that it can’t spread to other places.

Earlier, minister Bora visited some of the affected farmers to know the reason behind the outbreak of the virus.

As protective measures, a special squad from the North Eastern Regional Disease Diagnostic laboratory, Khanapara with support from the district administration culled a total of 40 infected pigs in Akalibari village under Kalaigaon Development Block on July 8, 2021.

Meanwhile, an official meeting scheduled to be held in the deputy commissioner’s conference later in the evening, to be addressed by minister Bora, is stated to be cancelled. The reason for the cancellation of the meeting is not clarified by the authorities.