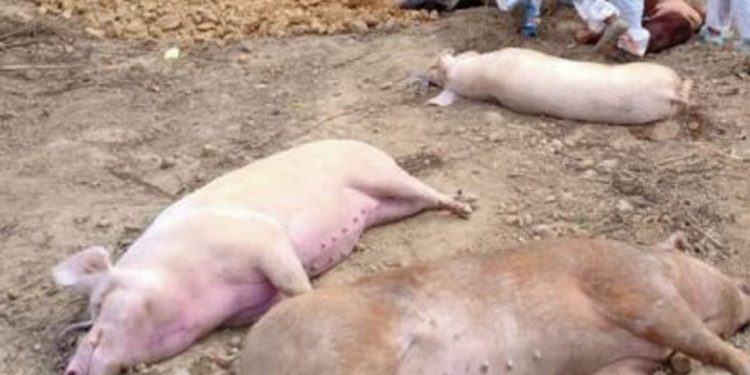 The district veterinary and animal husbandry department under the supervision of the district administration of Darrang has culled altogether 40 pigs, which were infected by African Swine Fever.

Dr Khagen Sarma, the district veterinary officer (DVO) of Darrang, has identified Aakelibari village of Outola Gaon Panchayat under Mangaldai revenue circle as the epicenter of the disease.

The culling was carried out on Thursday by a special squad from North Eastern Regional Disease Diagnostic Laboratory, Khanapara and later the culled pigs were scientifically dumped.

“The carcasses were dumped scientifically and bamboo barricades were raised surrounding the area so that flesh eater animals like dogs and foxes can’t enter into it,” said district veterinary officer Dr Sarma while talking to Northeast Now.

“The owners of the culled pigs will get compensation from the government based on a specific rate against the weight,” he added.

Meanwhile, until further order, the Assam government has prohibited pig rearing practice in all villages within the one-kilometer radius from Aakelibari village including Bahajani and Barampur as the area has been already identified as the infected zone.

“Pig rearing has been strictly prohibited in this infected zone till further order. Moreover, sale of pork has also been banned within the 10 km radius of the area. A total of 54 villages in Darrang and 13 villages in BTR fall in the prohibited area,” he added.

The veterinary officer stressed the need of sensitizing the local people, the majority of whom are involved in old traditional practice of pig rearing while few others practice it commercially.

It is learnt that over the last one month, the death of a large number of pigs was reported from the area.

Meanwhile, talking to Northeast Now, Dr Mozahirul Islam, subject matter specialist (veterinary science) of KVK, Darrang observed one major reason behind the outbreak of the disease as the lack of adequate bio-safety measures in the piggery farms.

Dr Hussain said there is vaccine for Classical Swine Fever but since there is no practice of vaccine for this new African variety of swine fever, prevention is the best possible remedy.