Assam: Mega dam to figure at AASU meet in Jonai 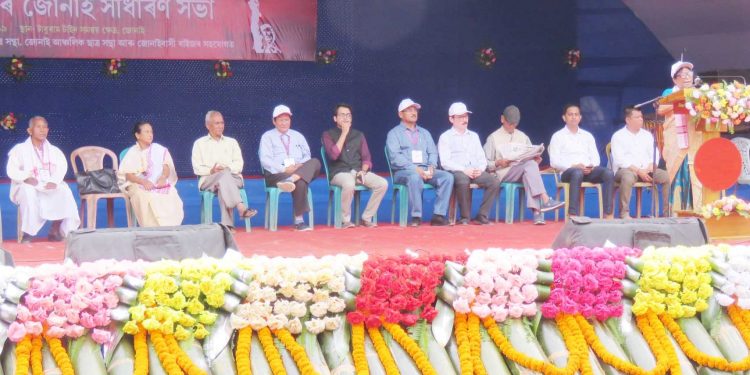 Problems of Dhemaji district including recurring flood and erosion and other infrastructure problems would be placed in the meeting for discussion.

Problems pertaining to indigenous Assamese communities, movement against mega dam are main agenda of the All Assam Students’ Union (AASU) general meeting, which began on Wednesday at Jonai in North Assam’s Dhemaji district.

AASU’s Dhemaji district president Deepak Sarma said the union’s future course of action for solving problems faced by the indigenous Assamese people would be discussed in the delegate meeting.

As such, problems of Dhemaji district including recurring flood and erosion and other infrastructure problems would be placed in the meeting for discussion.

“We are trying to promote unity among diversity and create awareness on the key issues and support among different groups of local people about AASU activities and win their support to intensify our efforts”, Sarma said.

The inaugural day programme of the conference was started with opening of the main gate and followed by opening of main meeting venue, Mising Murong Ghor, Book fair, Food mella and Exhibition halls by the invited guests.

The organizers have constructed pandals at separate locations for different activities.

The AASU conducted its last executive meeting of this session in presence of around 4000 delegates from different districts of Assam.

There will be a convention on ethnic cultures on second day Thursday, which is to be followed by open quiz competition, delegate meeting and cultural programme.

An open meeting will be held on concluding day on October 26.