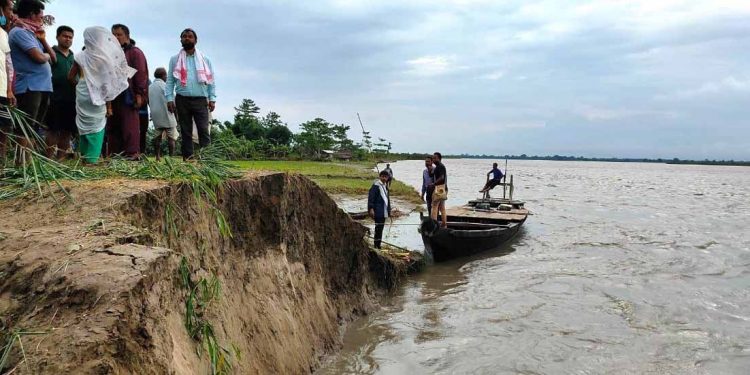 Unabated erosion by Subansiri in historic Ghunasuti in Lakhimpur district has brought a threat to this riverine area, which have a rich bio-diversity and is abundant with natural resources.

Continuous erosion by Subansiri, which has been on in the last three decades, again this time with incessant rain, has displaced dozens of households in Ghunasuti.

The erosion by Subansiri has swept away twenty houses recently in Ghunasuti of Ghunasuti Gaon Panchayat under North Lakhimpur Revenue Circle and a number of people have lost their lives as well.

The erosion also damaged a 3-kilometre stretch of Uriumtola- Bamunijan road in Ghunasuti snapping land communication in the entire area.

Ex-Lakhimpur MLA Ghana Buragohain visited the erosion affected areas of Ghunasuti on Sunday and met the victims. He demanded immediate construction of an agriculture bund in the affected areas so that peasants could do start their work.

The entire area of Ghunasuti is known for its fertility of the soil, producing quality products of exotic rice in the summer and mustard and pulses in the winter.

As a result, there has been a great agrarian crisis leading to shortages of food grains.

It may be mentioned that in last year about 40 families from No. 2 Naharani and 30 families from Koliyoni were displaced in the continuous erosion by Subansiri in Ghunasuti last year