It was on August 28, 2018 that a female elephant was found dead at the paddy field of Ranjan Singh in Tamulpur of Baksa district.

In a historic judgement, the Baksa district and sessions Court in Assam has sent a man to jail for 3 years and 3 months in an elephant electrocution death case.

The man – named Ranjan Singh, was found guilty for the death of a female elephant due to electrocution.

In its judgement pronounced on March 3, the Court said, “It is surfaced from the evidence that the innocent female jumbo lost its life because of the crime committed by the accused.”

“So considering the factual matrix and circumstances of the case, the accused is sent to three years and three months of rigorous imprisonment and fine of Rs 10,000 (ten thousand),” the Court added.

The plea of clemency by the accused – Ranjan Singh, was set aside by the Court while pronouncing the judgement.

“It is implicit that the accused being a poor labourer tried to protect his standing crops in the field from being destroyed by wild elephant committed the offence,” the Court said. 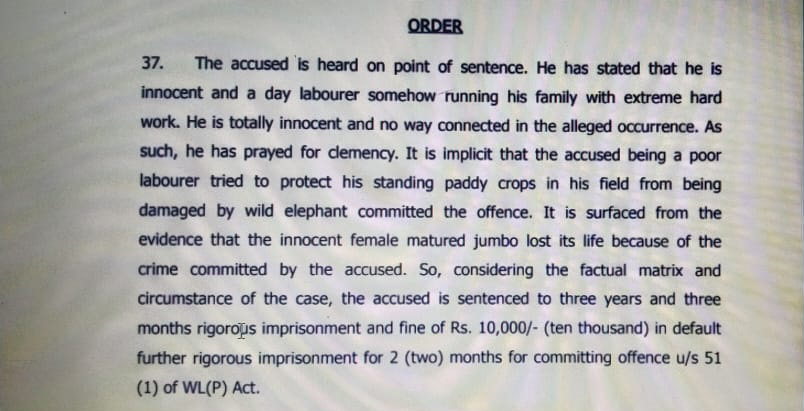 It was on August 28, 2018 that a female elephant was found dead at the paddy field of Ranjan Singh in Tamulpur of Baksa district.

Following investigation and post-mortem of the dead elephant, it was confirmed that the elephant died due to electrocution.

It was confirmed that the elephant died of electrocution after coming in contact with live GI wires illegally installed by Ranjan Singh around his paddy field.

While talking to Northeast Now, Amal Chandra Sarma, the director of Manas National Park and Tiger Reserve, welcomed the judgment and termed it a “historic judgment”.

While lauding the judge for his firm decision to punish the accused, who was responsible for the death of the innocent wild elephant, Sarma hoped that similar judgments would come up in other cases of electrocution death of jumbos.

He said in most of the cases due to lack of prompt action on the part of the forest officials, the accused involved in the electrocution deaths of elephants remain scot-free.

Sarma also said keeping in view of the poor financial background of the accused, most of the judgments relieve them without any harsh punishment, but he said this should not happen.